Many individuals may wonder what happens to the eyes when someone is near death and then passes away. Knowing what to expect if a loved one is in the process of dying can help you feel a bit more prepared regarding what you may see once they've passed away. Keep in mind that the majority of individuals will pass away with their eyes closed. Some, however, will pass with their eyes partially open.

Why Eyes May Open Before Passing Away

Eyes may fall slightly open as an individual nears death due to decreasing muscle tone. This loss can cause the eyes to open slightly at the time of passing. Medications may also impact whether eyes open at the time of death. This relaxation of the muscles around the face, as well as the rest of the body can also cause other relaxation related shifts. According to a study conducted with 100 individuals in hospice care:

Near death and post mortem, eyes can go through a myriad of changes that are due to the body's natural reaction to passing away. Some may include:

Eyes Opening and the Nearing of Death

Eyes may open and remain relaxed near death as the body begins to slow down. Relaxation of the muscles occurs right before someone passes away, which is then followed by rigor mortis, or the stiffening of the body. This relaxation impacts the muscles in the eyes and can cause some to open their eyes right before passing, and remain open after passing. 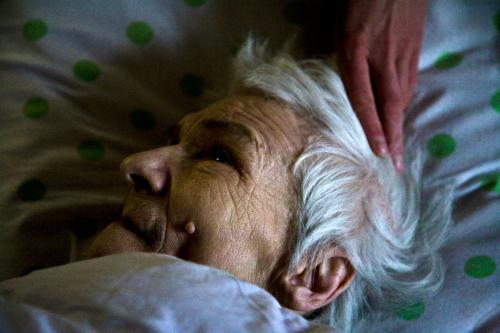 Myths About Eyes Opening Near Death

The eyes have always been of interest to different cultures around the world. With passing away, there are a few myths around why someone may die with their eyes open. Some believe that if someone dies with their eyes open, they were nervous or unsure of moving onto to the next world. Other think that they may be looking at angels coming to retrieve them. Coins placed on the eyes to hold them shut was a practice done by ancient civilizations as a way to pay a fee for your soul retrieval.

If a loved one is close to passing away, it can be helpful to know what to expect. While you can never know for certain if your loved one will pass with their eyes open or closed, keep in mind that certain factors will impact what happens. Eyes, like other parts of the body, are impacted as death nears, as well as post-mortem.

0
Comments
© 2006-2020 LoveToKnow, Corp., except where otherwise noted. All Rights Reserved.
Why Do Some People’s Eyes Open Before Death?