Many individuals are curious about what the actual moment of death is really like. It's hard to get a firm grasp on what it's like unless someone has survived a near death experience and only a small percentage of individuals actually go through this.

The Moment of Death

Aside from the physical shifts that take place during the active dying process, there may be some brain-based changes that also occur the instant someone passes away. Research, although not done extensively on this topic, has suggested a few major signs that the brain may experience feelings of peace, euphoria, and even a higher state of understanding and awareness during the moment of passing away.

Serotonin is a neurotransmitter in the brain that plays a part in mood, appetite, sexual drive, and memory. In a study, researchers found a tripling of serotonin during the dying process right before someone passed away. This may indicate an increase in happiness, or even euphoric feelings right before the moment of death.

Researchers conducted a study of adult rats who were experiencing cardiac arrest and measured their brain waves in an attempt to link their findings to the human experience of passing away. Anecdotally, individuals who survived near-death experiences often note feelings of peace and heightened awareness. The results of the study on rats indicated a "surge of synchronized gamma oscillations", meaning that the brain was highly active and engaged during the time of death. Although this may seem counterintuitive, this may explain why those who have survived near-death experiences note that they saw or experienced moments with intense clarity and that these moments felt as if they were actually happening. 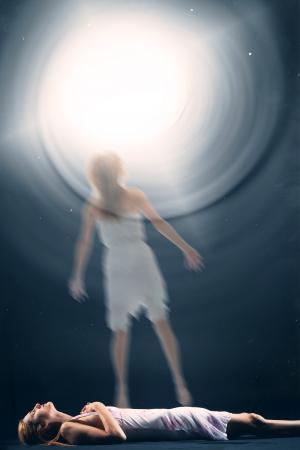 Understanding the Difference Between Sleep and Dying

During sleep, different parts of the brain are active depending on what sleep stage an individual is experiencing. Brain waves slow and speed up depending on what sleep stage you are in with quicker waves associated more heavily with dream states. An experiment illustrated that post death, some individuals showed brain wave activities that resembled sleep patterns despite showing no brain activity prior to their pulse stopping. While there is not an abundance of research that focuses on brain activity after someone has died, this study indicates that the brain can carry on even after the heart stops beating and may resemble brain waves associated with sleeping.

As previously mentioned studies indicated, some individuals experience bursts of clarity and euphoria prior to passing away. In other cases, some may experience pain, especially if they are dying due to a specific illness associated with discomfort. Cardiovascular disease, cancer, AIDS, as well as those with neurological illnesses have reported the highest incidence of pain as they near death. Pain management is a readily available option for those nearing the end of their life who are in a lot of pain.

Understanding the Moment of Death

The dying process will vary from person to person. As such, the moment of dying will also be different depending on the circumstances of an individual's death. As more research continues to be conducted, there will be a better understanding of what it's like to pass away, as well as what's going on in the brain as one nears death and after they have died.

Comments
© 2006-2021 LoveToKnow, Corp., except where otherwise noted. All Rights Reserved.
Discovering What Death Is Really Like