Pallbearers play an important role in a funeral service. The term "pallbearer" comes from the "pall," a cloth that was placed over coffins starting in medieval times. If you've been asked to be a pallbearer at a funeral, you should be aware of typical pallbearer duties before you accept.

What Does a Pallbearer Do?

How Many Pallbearers Does a Funeral Have?

Usually there are at least four pallbearers, as this is the minimum necessary to carry a heavy coffin. You may see services that have up to six pallbearers. Some funerals may also have an "honorary pallbearer" which is an individual who walks alongside the coffin with the pallbearers. This may be someone who doesn't have the physical ability to carry the coffin, perhaps because they are elderly or in a wheelchair, but still want to honor the deceased as a pallbearer.

The pallbearers at a funeral service are usually chosen by the family of the deceased. Pallbearers are often chosen from the friends and family of the deceased person. In the past it was considered inappropriate to choose members of the immediate family so they could focus on the service and handling their sense of loss, but this is no longer the case. A family can also ask the church to assist with finding pallbearers if they don't have any options, such as not having enough family available for the service. Most churches and funeral directors will assist a family with soliciting church members or staff to help out as pallbearers.

Is Being a Pallbearer Difficult?

Emotionally, it can be difficult to be a pallbearer as you will spend some time close to the coffin of the deceased and it may be hard to keep your grief in check. Physically, you will need to have some amount of strength to help carry the coffin. An empty coffin can weigh between 60 and 400 pounds. In some funerals, the coffin is carried on the pallbearers' shoulders, while at others it is carried at their average waist height. Some funerals will use rolling stands with wheels, called "wheel biers," to help make carrying the coffin easier.

Can a Female Be a Pallbearer?

Females can definitely be pallbearers, although a smaller female with less upper body strength may not wish to be a pallbearer. This is especially the case for a funeral where the coffin will be held on the shoulders. However, if a wheel bier is used to assist with transportation, the ability to carry a heavy object like a coffin is not as much of a concern.

Can a Child Be a Pallbearer?

Usually pallbearers are at least 16 years of age. This is due not only to the need for the pallbearer to be tall and strong enough to help with carrying a coffin, but also the emotional aspects of the role. A pallbearer needs to remain calm and reserved during the service, and children are usually not able to remain emotionally mature due to coping with grief and loss. If a child is mature enough to handle the role, at the family's discretion they may allow them to be an honorary pallbearer.

Since there is no coffin to carry in when there is a cremation, pallbearers are not necessary at the service. However, some families appoint pallbearers to walk alongside one person who carries the cremation urn into the service as a symbolic gesture.

If you accept the position of pallbearer, you will be expected to follow some basic etiquette rules for pallbearers at funerals. Always keep in mind that being asked to be a pallbearer is a great honor and you should approach your role with respect and solemnity. 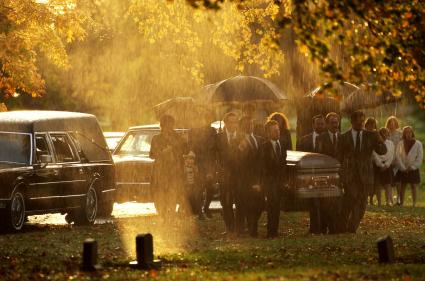 Pallbearer Etiquette At the Start of the Funeral Service

Pallbearers should dress conservatively with typical funeral attire in mind. For men, this means a dark suit, tie and appropriate shoes. Women should wear dark conservative clothes, which can be a modest dress, or pants or skirt suit set. Women should not wear high heels but opt for dark shoes with a flat or low heel as you will need to carry the coffin for some distance. You will also be walking on uneven surfaces if you are carrying the coffin into a cemetery gravesite. Always check with the family prior to deciding on what to wear, as some funerals may have a more "celebration of life" focused theme and the family may prefer less somber attire.

Honoring the Pallbearer Role at a Funeral Service

The pallbearers fulfill a critical role at a funeral service, and an invitation to be one should not be taken lightly. You need to be sure you can carry out the physical aspects of the role, while also staying emotionally in control and openly supportive of the family during the service. It is a great honor to be asked to perform pallbearer duties, and it's a beautiful way to show respect and reverence for the deceased individual.