The Bible is filled with rich symbolism helping to better describe spiritual truth by comparing it to familiar earthly settings. Birds have long been portrayed as having spiritual significance. Does the red cardinal carry biblical meaning and significance? This article will help you understand the traditions and spiritual interpretations concerning the presence of cardinals.

An old folklore preserves the culture's belief that "When a cardinal appears in your yard, it's a visitor from heaven." Cardinals have been a symbol of the presence of light in the middle of darkness, hope among the ashes of sorrow, and warmth in the coldest of winters. The poetic saying, "Cardinals appear when angels are near" captures the hopes in the persona of the beauty and elegance of the creature of flight. Some of the traditions about the meaning of the presence of a cardinal are:

Although a common opinion is that the presence of a red cardinal represents God or a messenger from God, the word cardinal is not specifically used in the Bible. Cardinals are not native to the Mediterranean area, the setting for most of the books of Scripture. 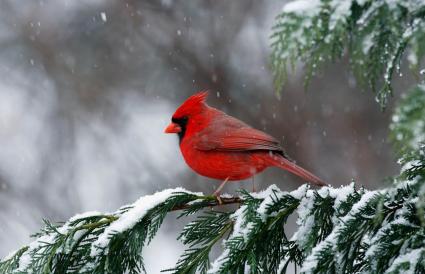 There is no question that God has used animals and birds throughout the Bible as signs of His presence or to draw attention to His message. God used eagles, doves, sparrows, ravens and other birds to demonstrate His love and care for humans, and in particular the nation of Israel. Some examples include:

Some theologians see the cardinal symbolizing the Holy Spirit, combining the fire element of the Spirit's work with the energy and life found in the Spirit. Tied with the blood of Christ, the cardinal represent the eternal life-giving nature of Jesus and His ministry. Though not specifically a cardinal, all four of the Gospels in the Bible does portray the Spirit as a dove descending from the heavens to rest upon Jesus.

Although there is disagreement about the word's exact origins, tradition holds that the first people in Rome to be called cardinals were deacons from the seven regions of the city. The use connected these church leaders with the word's connotation of "principal" or "superior."

The Blood of Christ

The red color of the cardinal has been associated with the living blood of Christ. Cardinals have been seen as a symbol of vitality. In the Christian context, the blood of Christ is the heart of its message and the vitality is everlasting. "Christ sacrificed his life's blood to set us free, which means that our sins are now forgiven" (Ephesians 1:7 CEV).

Cardinals: Bishops in the Church

By the sixth century, the name cardinal was also given to the senior priest in each of the parish churches of Rome who had not actually been ordained in that particular church. By 769 only a Cardinal was eligible to become the Bishop of Rome (Pope), and by 1244 Cardinals were given the privilege of wearing a red hat. 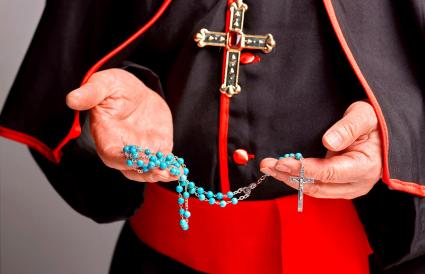 Development of the Word

The word cardinal comes from the Latin root "cardo" meaning a hinge. Like the hinge on a door, the cardinal is seen as a connecting point between heaven and earth, allowing messages back and forth. Since a hinge is the device on which a door is able to function, "cardo" came to mean "something on which a development turns" and "something very important."

Many cultures attach a degree of spiritual or symbolic importance to cardinals. Seeing a cardinal in real life or dreaming about them can carry different messages.

Ornithologists, those who study the behavior and physiology of bird and bird habitats, have noticed that when a cardinal finds a mate, they typically stay together for life. Their stable relationship characterizes love and romantic passion in many cultures. There are some Native American tribes which believe that if an unmarried individual spots a cardinal, it means they will soon begin a new romantic relationship.

Other Native Americans believe that cardinals are messengers from the spirits of the dead. As such, the cardinal has a strong connection with ancestors. Its appearance stirs the importance of staying connected within the family. Some cultures adopt the cardinal as a totem animal. Rather than migrating, the cardinal stays at home during the difficult winter months.

Other cultures interpret the presence of a cardinal as a fortune occurrence of beauty. Therefore they see the cardinal as a symbol of the coming of good luck. A dream about a cardinal may be a sign that someone is encouraging you to follow your dreams, passions and plans for the future.

For some the cardinal stirs the correlation between its redness and the appearance of the phoenix in Greek mythology. Myths from the Alexandrian area of Egypt carried their own traditions of a cardinal-like phoenix. Cardinals symbolize the energy and rebirth of the phoenix. People apply the principles as a sign that an individual will rise from the fires of turmoil and trouble to become strong and victorious.

Messages from the Heavens

God has a history of sending messages to His people. Birds are often believed to be symbols of spiritual messages connecting heaven and earth. While the red cardinal biblical meaning may be spurious, the presence of the cardinal stirs people to feelings of life, restoration, communication and hope. The tradition surrounding the cardinal is rich and respected in history, pointing to the meeting point between the physical and spiritual worlds. You will not be alone if you ponder and contemplate a message from beyond when you sight a cardinal.