If you've been invited to attend a memorial mass, you may be unsure about the religious traditions behind this ceremony. There are clear differences between a memorial mass and a funeral mass.

What Is a Memorial Mass?

A memorial mass is a ceremony designed to commemorate the dead as part of a regular Christian mass. There are several reasons why a family might have a memorial mass for a deceased loved one instead of a funeral mass. For example:

There are a few major differences between a memorial mass and a funeral mass.

What Happens at a Memorial Mass?

During a memorial mass, the priest reads passages from the Bible, which usually includes at least one reading from the Old Testament and one of the psalms. Friends and family may also deliver a eulogy. There may also be music and signing of traditional religious songs or contemporary songs that are popular at funerals. With a Catholic memorial mass, there will also be the usual aspects of a regular mass, such as the sacrament of Holy Communion and the homily by the priest. 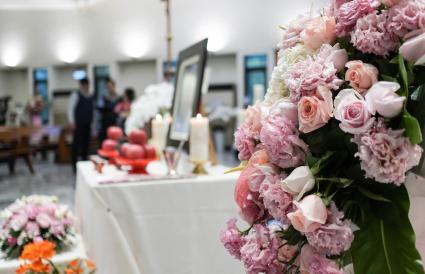 When and Where Is a Memorial Mass Held?

Since the body is not present, a memorial mass can be held anytime. Sometimes they are held soon after the person's death, or on special dates such as one year past the day of their death, or on a special feast day. A memorial mass tends to run between 45 and 60 minutes. Memorial masses typically are held in a church, especially if it's a Catholic memorial mass, although you can find ones that are held in places dear to the family or the deceased. This could be at a private home or backyard, in a local park or at a rented meeting space.

What to Wear at a Memorial Mass

If the memorial mass is held soon after the time of death, the etiquette for what to wear will be very similar to that of a funeral. If it is held later on, such as on an anniversary, it's not unusual for the ceremony to be a bit more casual. When in doubt, it's best to wear dark, somber colors that are conservative in style. Business clothes can also work for a memorial mass. Avoid jeans, shorts, tank tops and casual clothes. Some memorial services are more celebratory and are even called "Celebrations of Life" and the invitation may ask you to wear more informal clothes with brighter colors.

Whether you're attending a memorial mass or a funeral mass, your participation as an attendee will be much the same. Remember that the focus of the ceremony is to honor the passing of a loved one and to follow the traditions of the particular Christian denomination. If you're not sure what to do or what to wear, ask a family member or priest who will appreciate your interest in making sure you're participating appropriately in this solemn event.

0
Comments
© 2006-2020 LoveToKnow, Corp., except where otherwise noted. All Rights Reserved.
Resources, Advice & Tips for Covid-19
Read More
What Is a Memorial Mass?