Law enforcement funeral traditions and customs are put in place to honor active, retired, or non-line-of-duty officers. After the family has been notified in person of the passing of their loved one, a police liaison will inform them of what customs can be performed at the funeral if wanted and if resources allow for it.

The family liaison officer is assigned to the deceased officer's family as a point of contact and is typically someone who the family is familiar with and comfortable with. The FLO assists the family in terms of appropriate support, assistance with transportation to the funeral ceremony, and anything else the family may need during their time of mourning. They may also discuss police funeral traditions with the family and help them decide what they'd feel comfortable with.

These two appointed individuals work together to coordinate the procession route and the accompanying traffic that may result. The traffic coordinator also assists with parking at the funeral service, as well as the cemetery. During the procession, there may be an abundance of police cars and police motorcycles in the procession line, honoring the fallen officer. If you see a police funeral procession, be sure to yield to them until the last car has passed.

The last radio call wording is typically unique based on the specific police department. The last call may take place once or several times after the passing of a police officer. If done more than once, officers may gather in the police department and have one dispatcher make the final call soon after the passing, and again closer to the funeral. After eulogies are given, they may also do a final call during the funeral ceremony, which is then followed by a moment of silence.

The Honor Guard may include up to 30 officers who are tasked with guarding the casket in shifts, acting as pallbearers, as well as acting as the color guard. If the family is comfortable with this, prior to the funeral beginning, two officers will guard the casket in 30 minute shifts. Those on the honor guard may also be assigned to guard the family's house prior to the funeral service. 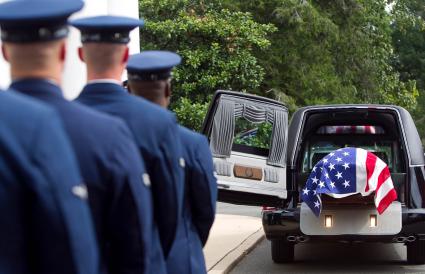 The 21 bell ceremony may replace the three volley salute if the family wishes not to hear shots fired. During this ceremony, bells are tolled 21 times, which is noted to be an extremely high honor.

Police aviators may be able to do a flyover towards the end of a police funeral. Typically one spot is left open, known as "missing man formation" to honor the officer who passed away. Five to seven planes may do a flyover, and helicopters have been seen doing flyovers in groups of about 10.

The songs Amazing Grace and Going Home are often played on the bagpipes to honor fallen police officers. This tradition was born out of the Irish Potato Famine when those of Irish descent were forced to take on more life endangering jobs (police officers, firefighters) due to discrimination in the United States. Playing bagpipes became synonymous with funerals and is widely utilized to honor those who passed in the line of duty.

Do Police Play Taps at Funerals?

Playing of taps is a sad, solo, bugle call that signifies that it is time for a final rest. If the police officer was affiliated in the military, this may be an honor that can be arranged at the funeral.

There are many options when it comes to police funerals. This may depend on the officer's standing, their family's wishes, and the police department's resources. Types of police funerals include formal (maximum amount of traditions and honors), non-formal (no traditions), private (only for close family and friends without traditions), and semi-formal (some traditions and honors). Categories of death that impact the potential funeral formality include:

Aside from ceremonial traditions, officers may place black bunting on their police cars, wear black tape on their badge, and lower their flags to half mast during the mourning period and/or funeral service. Knowing what to expect and better understanding police funeral traditions and tributes can help you feel more prepared for this experience.