If you need ideas for funeral songs and music, take a look at what's popular at traditional funerals and how modern funeral music has evolved. The songs you choose for a loved one's funeral should reflect both their preferences and personality and capture the emotions of the crowd.

If you've been to several funerals, there are probably classic songs you expect to hear at every successive one. These are the songs that have withstood the test of time and proven to capture the somber spirit of funerals for the masses. If you're planning a traditional funeral, stick with traditional songs and music that will sound familiar and heart-warming to all in attendance.

Traditional and popular songs played at funerals often include religious hymns combined with memorable songs about losing a loved one. These songs are often played on a piano without the lyrics or sung by a close friend of the family. Other traditional instruments include bagpipes for first responder funerals. Traditional funeral songs are typically performed live. Songs such as Amazing Grace and I Will Remember You are traditional funeral songs.

Each culture has its own ideas about what type of music is appropriate for or expected at a funeral. If the deceased had strong ties to their heritage or culture, make sure you understand their ideas about funeral music. Irish funeral music usually includes ballads, folk songs, and hymns that may or may not include the lyrics. While bagpipes seem like the obvious instrument choice, a capella performances are also common. Songs such as Danny Boy and Carrickfergus are traditional Irish funeral songs. 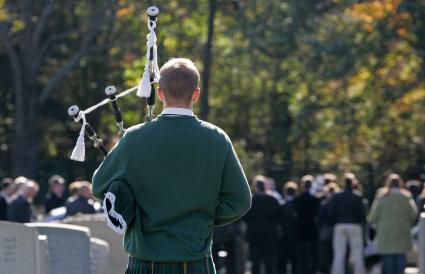 Funerals that are held in churches or for a deeply religious person include music and songs integral to that faith. They touch on the meaning of death as each religion views it and offer healing words for those grieving a loss. You can expect to hear religious funeral music played on a piano or organ.

Many Catholic churches are steeped in tradition and only allow the playing of Catholic funeral songs at a Catholic funeral mass. You typically get to choose about five songs and they must fit in with the current season. For All the Saints is a traditional Catholic funeral song that can be played during any part of the funeral while Holy God, We Praise Thy Name is used only during the recessional.

Hymns are songs that praise God and are often sung by the entire crowd as a unifying prayer. Traditionally hymns are played on a piano or organ, but today they are often played on a guitar. Choosing meaningful funeral hymns connects the services to religious beliefs and gives family members words to heal by. Popular funeral hymns include Jesus Loves Me and I'll Walk With God. Hymns make up most of the touching songs often sung at funerals.

Funerals are generally sad occasions as each person mourns the loss of someone important. Songs that evoke sadness, forgiveness, regret, and grief resonate with guests and give everyone a chance to express these solemn feelings. 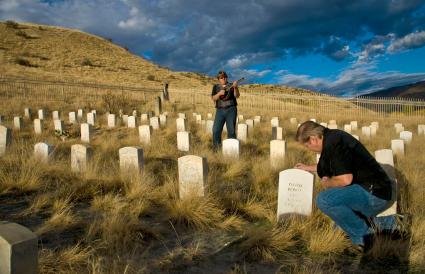 Country songs often tell a complete story and moving country songs for funerals tell the story of a person's life. A close friend or family member with a guitar can perform the song or you can play a version sung by the deceased's favorite country singer. Songs like The Dance by Garth Brooks are perfect for the funeral of a spouse while I Hope You Dance by Lee Ann Womack celebrates life.

No matter what genre of music you prefer to use, it's included in a list of the saddest songs about death. From rock to rap and pop to funk, nearly every popular band or singer has belted out at least one sad song relating to death. Use these songs to capture the spirit of the deceased by choosing a sad song in their favorite genre that will also hit home for many funeral guests. Songs such as Fade to Black by Metallica or Only One by Kanye West give a more personal feel to any funeral.

Don't discount sad love songs in your funeral music choices. These songs are about love, but often about the loss of love. Sad love songs talk about missing someone who was dear to your heart, making them appropriate for funerals. Popular tunes like My Immortal by Evanescence or Unbreak My Heart by Toni Braxton express the pain and sadness felt in losing love.

New music is released every year by beloved artists and new artists. As these musicians experience loss in their lives, they often heal through music. If there's a modern song that captures your feelings about your loss, you can use them during the funeral services. 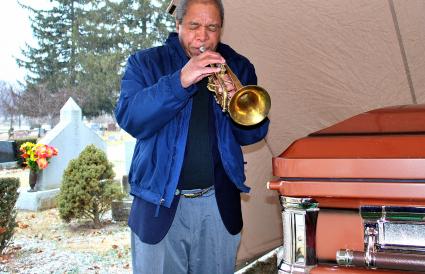 Songs that are popular on the radio now can be comforting to grieving friends and family. The familiar tunes or memories of hearing the song with their deceased loved one can be cathartic. Check out the top funeral songs people will relate to for ideas on which songs make sense for an end-of-life event. Older songs such as Let It Be by The Beatles have healing lyrics while Somewhere Over the Rainbow by Israel Kamakawiwo'ole shares hope that the deceased is in a better place.

Funerals today are often replaced with or paired with a celebration of life party. Look for perfect celebration of life songs that are upbeat and uplifting to get guests in the party spirit as they honor the life, instead of the death, of their friend. See You Again by Wiz Khalifa and Charlie Puth has a catchy, up-tempo beat but still reflects on missing a loved one. Time of Our Lives by Pitbull and Ne-Yo is a straight club song that celebrates living life to the fullest.

Funeral songs and music set the mood, or tone, of any end-of-life event. Whether you're grieving, celebrating, or both you can play these songs during the wake, funeral, burial services, and at a shared meal after the funeral.

1
Comments
© 2006-2020 LoveToKnow, Corp., except where otherwise noted. All Rights Reserved.
Ideas for Funeral Songs and Music