Eulogy and elegy are two words that may be used interchangeably though this is not quite correct. They both refer to specific types of speeches and written pieces that are related to funeral ceremonies.

Elegy vs. Eulogy: What's the Difference?

There are a few clear differences between elegies and eulogies:

What Is an Eulogy?

A eulogy comes from the Greek work eulogia and refers to a text specifically designed to praise a person. In some cases an eulogy can be written to praise a place, item or belief.

How Are Eulogies Delivered?

You will most often hear eulogies read aloud at funeral services. Depending on the religious tradition, it may be an official of the church who reads it, such as a deacon or pastor, or more often it's a member of the deceased's family or a close friend. Eulogies are not appropriate at a Catholic mass and instead should be given during the funeral vigil.

Are Eulogies Only for the Deceased?

Eulogies are usually written to praise a person who has died, but in some cases you may find eulogies given publicly or published to praise a person who is still living. This can happen if a person is terminally ill and the friends and family would like him or her to hear the praise before they pass on. Eulogies have also been given to employees who are retiring from the workforce after many years of service.

Is a Eulogy an Obituary?

An eulogy should not be confused with an obituary, though they may contain information in common. An obituary is designed to provide information on the events and accomplishments of a person's life in a factual, straightforward manner. An eulogy is more creative and involves accolades for the person which can be flowery and embellished.

If you've been tasked with writing an eulogy, it will be helpful to see some famous examples to understand what to include and how to write them. Some renowned eulogies of famous individuals and from literature include: 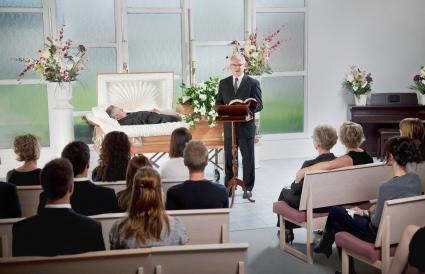 What Is an Elegy?

An elegy is a poem, song or couplet that is usually written in memory of a deceased person. The word elegy is Greek and Latin in origin and comes from the word elegos which translates to "a lament." Elegies are normally melancholy and reflective in nature although a poem that follows a specific structure, regardless of tone, can also be considered an elegy.

How Are Elegies Written?

The structure of an elegy is a series of hexameter and pentameter lines that alternate from line to line. This structure is called "elegiac meter." Elegies should read like poetry rather than a speech.

How Are Elegies Delivered?

While an elegy can be read at a funeral, either during the vigil, at the ceremonial mass or graveside, they are often presented in written form instead. They can also be accompanied by music.

There are some beautiful and moving examples of elegies throughout classical and modern literature. A few examples you can start out with to find inspiration to write your own include:

Elegies and Eulogies to Remember the Dead

While there are clear differences between eulogies and elegies, they both serve the purpose of remembering ones who have passed on. They can be written for great historical figures with stirring accomplishments or for close friends and family who have left us to grieve and honor their lives.