Many have used composting to turn leaves and grass or scraps from the food table into fertilizer to nourish the soil. As environmental issues and sustainability arguments continue to mount, many are wondering if human composting can be a viable option for the world's preservation. Before you decide on this process, take a look at some of the questions and issues involved in composting human bodies as an alternative to traditional burials.

Human bodies are made up of many organic elements which naturally decompose. Even buried bodies move toward decomposing in the wet soil. The carbon, water, and other chemicals are dispersed into nature to begin again the continuing life cycle of the planet. Because of technology, the place of humans in the structure of society, and the way humans bury their dead, humans are the only creatures that are not a natural part of the energy life cycle. Although everyone returns to dust eventually, for humans the process is delayed exponentially.

Early science courses outline the process of the food chain and energy cycle. The sun provides energy to plants, causing them to grow and flourish. They continue until they are eaten by a rabbit. The rabbit is later eaten by a larger animal who is eventually also eaten. In the final stage of the process, the larger animal dies, decomposes and returns to the soil. This helps the plants grow, and the cycle begins again. Human composting seeks to reposition humans into the cycle.

The option for human composting began because of the efforts of a graduate student in architecture. Katrina Spade grew up in New Hampshire, not particularly religious, but viewed nature as spiritual in some way. She earned a Bachelor of Arts in anthropology from Haverford College. She began to focus on sustainable design, helping build a compost-based bioenergy system. While earning a Master of Architecture from the University of Massachusetts Amherst, she authored a thesis entitled "A Place for the Urban Dead."

The Trend of Human Composting

The state of Washington has been leading the way in finding alternatives in burial that are sensitive to the needs of families and the needs of the environment. Often, the death that meets these standards is called a "good death." 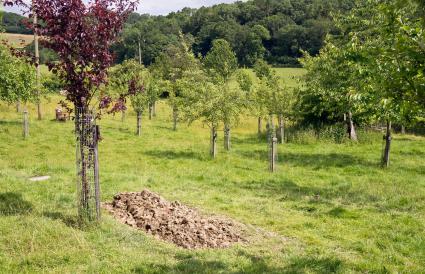 There are many restrictive codes for composting of any kind, especially when done in the limits of a city. Although technically not illegal, human composting is restricted because of other laws and prohibitions. Human composting has been legal in Sweden since 2005, and interest is growing around the world. The process is also legal in the state of Washington, where the first plant owned by Recompose offering human composting as an option is set to be available in 2021.

How Long Does the Process Take?

Human composting relies on an accelerated form of decomposition. The Recompose corporation distinguishes between decomposing, what happens to a body above the ground, and recomposing, which involves integrating it into the soil. The corpse is put in a vessel with wood chips, straw, and alfalfa. Oxygen is introduced into the container while the body is slowly rotated, increasing the activity of microbes in a warm environment. Roughly a month later, the corpse will produce about a cubic yard of soil, roughly about four large wheelbarrows full. The process is estimated to cost something a little less than $6,000. Recommendations are given that the soil is used in forests and non-food gardens.

As the availability of land continues to diminish, and the forces disrupting nature mounts, people look for ways to compassionately serve the needs of humans while being responsible and responsive to the environment. Many believe that human composting provides a feasible option for a positive answer to both.

Comments
© 2006-2021 LoveToKnow, Corp., except where otherwise noted. All Rights Reserved.
Digging Into Human Composting: The Facts and Process