A Vietnamese funeral begins with a wake and follows specific traditions and rites. There are certain etiquette guidelines to follow to avoid offending the grieving family.

In the past, a Vietnamese funeral could last up to a month or more. However, today, it usually lasts around three days. It begins with the preparation of the deceased's body that will be on display at the family home until it is time for the funeral.

Family members and close friends prepare the body by washing and dressing the deceased in their best suit of clothes. While awaiting the delivery of the casket, the deceased is placed on their bed. The family places a small knife on the deceased's stomach to protect the soul.

Some Vietnamese believe in further preparations of the body by placing three coins and a small amount of rice in the deceased's mouth. This tradition represents the cycle of life when the body will be returned to the earth.

Rituals for Placing Body in Casket

The casket is placed in the main living area. The deceased is washed once more and dressed in white clothing, then placed in the casket. Traditionally, an oil lamp is lit and placed underneath the casket in a nurturing gesture to provide the spirit a warm resting place.

If the family has an altar, it is decorated with photos of the deceased and flowers. Incense is set on the altar and burned. Each family member places a food offering on the altar. The typical foodstuffs are three bowls of rice, three cups of tea, and other daily foods, such as hard-boiled eggs. 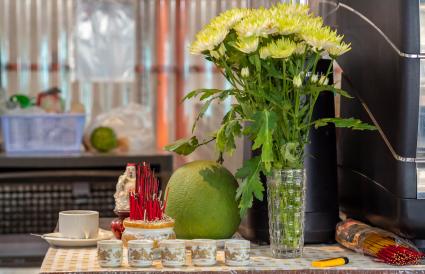 Family members take turns sitting with the body while it is in the home. Other family members recite prayers and light incense at the start of each day.

Traditionally, black and white funeral or mourning flags are placed outside the home to follow the road to the main thoroughfare. These define the way to the home so mourners can find their way to the wake to pay their respects. In ancient times, the flags were also used as an announcement there was a death at the home.

How to Act at Vietnamese Wake and Funeral

You will act with the same kind of somber respect as you would at any funeral. However, it is considered rude and very disrespectful to smile or laugh while at the wake or funeral. Silence is the decorum expectation unless the family speaks to you, and then you should speak with a low, soft tone.

Gifts for the Family

Flower gifts are set near or around the casket and will be taken to the cemetery. Other gifts include money to defray funeral costs, food, and decorative packages of incense.

What Flowers Are Appropriate for a Vietnamese Funeral?

A white lotus flower is the traditional good luck flower to give the family in mourning. However, any white flower is considered appropriate.

The family is easily identified by their traditional white clothing. You should wear black like the other funeral attendees. The mourning period is determined by the family's religious practices.

Some families wear headbands to distinguish their relationship with the deceased. Many families prefer to wear white headbands, while others choose to wear yellow ones to the funeral.

What Happens at a Vietnamese Funeral? 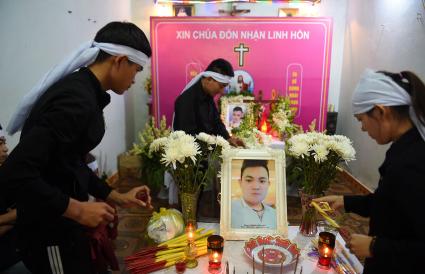 If the deceased is to be cremated, the procession route is to the crematory where family members stand vigil while the body is cremated. Pregnant women are forbidden to attend a cremations since it is believed the released soul may become entrapped in the baby's body instead of continuing its journey into the spirit world.

Once Cremation Is Completed

The family members return home once the body has been consumed by fire and the next morning, they return to collect the ashes. The remains may be scattered in a river or ocean per tradition. Some modern families choose to keep the remains in an urn and place the urn in a columbarium or a garden created just to enshrine urns.

Musicians accompany the procession and play uplifting celebratory music if the deceased died a natural death after a long life. If the deceased's life was cut short due to misfortune, illness, or an accident, then the music is toned down to a proper somber tempo/style.

The eldest son leads the procession, carrying a framed photo of the deceased. Votive paper symbolizes paper money, and coins are dropped along the way to the cemetery. Some sects burn the paper to speed its process in reaching the deceased in the afterlife.

What Happens at the Gravesite?

In traditional burials of some sects, the deceased's clothing and other belongings are burned. Some traditions forego the symbolic burning of clothing.

The family altar is often carried to the gravesite where it is reassembled. Incense is lit, and offerings are made as part of the ceremony. Prayers are offered, and the casket is lowered into the prepared gravesite.

After the Funeral Service

After the body has been interred, the funeral procession returns to the home where a meal is served. The mood remains somber. The family remains in mourning from two to three years, depending on their relationship with the deceased.

Learning What to Expect at a Vietnamese Funeral

It's advisable to learn what to expect if you plan to attend a Vietnamese funeral. Keep in mind that many modern families have adopted Western cultural funeral rites, while others have created a hybrid tradition in a blending of the two.

0
Comments
© 2006-2020 LoveToKnow, Corp., except where otherwise noted. All Rights Reserved.
Resources, Advice & Tips for Covid-19
Read More
What Happens at a Vietnamese Funeral?