To understand what dying of consumption does to a person, you need to understand that consumption in the modern world is called tuberculosis (TB). This disease has been around since ancient times.

What Did Dying of Consumption Disease Mean?

Your Dictionary defines consumption as, "a wasting away of the body." To understand what it means to be dying of consumption during the 19th century, you need to understand death was caused by a vicious lung disease. Consumption ravaged the world during the 19th century, although it has been around far longer. It was easily spread whenever a patient coughed in the presence of others, and the droplets from their diseased lungs easily infected those exposed.

According to the Centers for Disease Control and Prevention (CDC), the bacteria that causes TB may be over 3 million years old. Prior to the 1800s, consumption was known by several names throughout history. In ancient Rome, it was called Tabes. In ancient Greece, consumption was called Phthisis. The ancient Hebrew name was Schachepheth.

According to The American Lung Association, in the 1700s, consumption was dubbed the Great White Plague because its victims suffered from a stark sickly paleness. Tuberculosis (TB) is the name eventually given to the once most-feared disease that gripped the world.

In the 1800s, one out every seven deaths in America and Europe was someone who had contracted consumption. According to the University of Virginia, 450 people in America died each day and cities were the main breeding ground with people living so closely together.

Worldwide Epidemic in the 1900s

Consumption wasn't discriminatory. Children and adults of all ages and in all income brackets contracted the disease. To be diagnosed with consumption was considered a slow, agonizing death sentence. In fact, during the late 1900s, consumption (tuberculosis) was the number one cause of death in the U.S. as well as Europe. If a patient survived, they were plagued with flare-ups and recurrences of the disease. 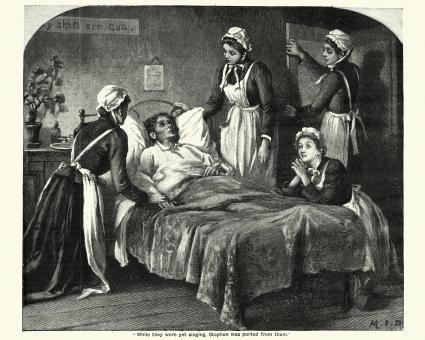 Consumption Death Was Slow and Excruciating

TB was a slow dying process. According to TB Facts, the bacteria burrow into the lungs and begin to eat through the tissue working its way from the inside of the lungs to the outside. This destructive bacteria reduce lung capacity and function. The patient's chest begins to fill with blood as the destroyed lung tissue turns to liquid. The lungs eventually liquify, robbing the patient of oxygen as the patient drowns and respiratory failure follows.

The tuberculosis sanatoriums were TB quarantine centers where experimental treatments were practiced in the effort to find a cure. The National Institutes of Health features the diary of a woman stricken with TB in the 1940s. This journal provides insight into the daily activities and treatments of a patient in a TB sanatorium and her long, slow process of recovery. By the 1950s, antibiotic therapies replaced the need for sanatoriums.

In the 21st Century, modern medicine offers hope to TB patients. Unlike the past, today's TB patients have several therapy options that can lead to cure or in more severe cases, maintenance therapies.

Latent TB occurs when a person is infected, but the disease isn't active. This type of infection isn't contagious. A latent TB infection is treated with preventive drug therapies to kill the germs. This is typically a six- to nine-month treatment of antibiotic isoniazid (INH).

The typical treatment therapy for a patient with active TB is with a cocktail of antibacterial medications for six to twelve months. In addition to antibiotic isoniazid (INH), it contains ethambutol, pyrazinamide, and rifampin. Patients are warned that not completing the round of drug treatment can cause reinfection as well as causing them to contract drug-resistant TB.

If you work in a healthcare environment, you can protect yourself by taking the Tuberculosis vaccine. If you are exposed to someone with TB, you may need to be vaccinated to protect your health. Taking the TB vaccination is a decision that's made on an individual basis.

Understanding the Horrors of Dying From Consumption

Once you understand the modern term for consumption, you can grasp the agony of dying from this disease. Modern medicine has helped reduce the death rate, but much of the modern world population still suffers from TB as a leading cause of death.

0
Comments
© 2006-2020 LoveToKnow, Corp., except where otherwise noted. All Rights Reserved.
Resources, Advice & Tips for Covid-19
Read More
What Does Dying of Consumption Mean?