Victorian Superstitions About Rain at a Funeral

Some of the considerations of rain at a funeral come from the superstitions of the Victorian era. Many of these superstitions have ancient origins, but were prominently accepted in England specifically.

What Does It Mean When It Rains at a Funeral?

Generally, Victorians took rain at a funeral as a sign the deceased had safely arrived in heaven. The rain might be considered the deceased's tears falling from heaven in remorse they were no longer with their loved ones. It might have been considered to be tears from saying goodbye to their Earthly life and those they left behind.

Is It a Good Sign if It Rains on a Funeral? 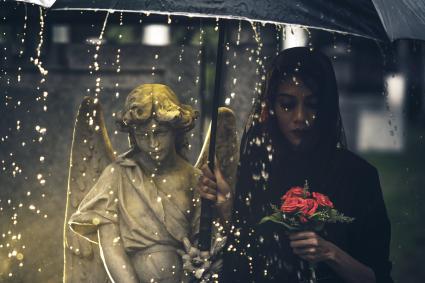 Rain During a Funeral Procession

If you were in a Victorian procession on the way to the funeral and it began to rain, you took it as a good omen. The funeral procession being rained on simply meant the deceased was walking through the pearly gates of heaven as you were traipsing to the cemetery carrying their coffin so you could bury their corpse. Family and friends were comforted knowing their loved one was now a resident of heaven.

What Does It Mean for It to Rain After a Funeral?

The old age interpretation of a rainfall after a funeral was a good omen. It was believed that the rain was heaven's washing away of grief and sorrow. If a rainbow appeared once the rainstorm ceased, then it was an added affirmation that the deceased now resided with God in heaven.

Rain on an Open Grave

Not all rain and funeral superstitions were centered on the actual funeral. Some of the superstitions surrounding funerals and rain focused on other aspects of cemeteries. For example, it was believed that if rain fell on an open grave, then someone in your family was fated to die within the following year. This was one of the more macabre interpretations of rain and funerals.

What Does It Mean When It Rains After Someone Dies?

Not all rain omens occurred with rain at a funeral. In fact, Victorians believed if it rained after there had been a death, the rain signified a cleansing of the soul of the deceased. The arrival of the rain meant the soul was moving on to the next life, since in nature rain always brings new plant life and growth. Families took consolation in a sudden cloudburst soon after their loved one died.

Heavenly Tears Shed as Rain at a Funeral

Another popular belief or superstition purported the rain was the tears of God. Whether it was God showing sympathy for the sorrow of the family and friend or tears of joy that the deceased had returned home depended on how the person chose to interpret the messaging. Some believed the raindrops were the tears of compassionate angels.

No Funeral if It Rains

An old tradition of various cultures view a rainy day as a bad sign for a funeral. The funeral shouldn't be held as long as it is raining.

Other Death Related Omens and Rain

One of the more disturbing meanings of rain and death had to do with the size of raindrops. It was commonly believed that the fall of large raindrops were an omen that someone had just died. 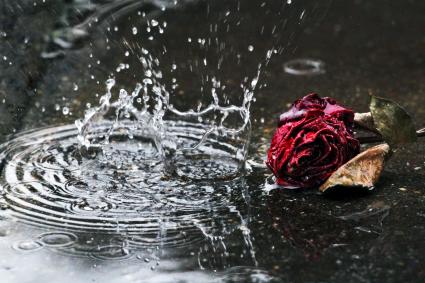 What Does It Mean If It Also Thunders at a Funeral?

Thunder After a Funeral

However, if thunder rumbled across the sky after the funeral, it was a positive omen. The thunder was considered an omen from God or an angelic trumpeting that the deceased had arrived at the pearly gates of heaven and had been properly greeted.

Rain at a Funeral Meanings

Old superstitions view rain at a funeral as a positive sign. Many families have taken comfort in a rainy funeral with the belief it is an omen that the deceased have ended their journey to heaven.

Comments
© 2006-2021 LoveToKnow, Corp., except where otherwise noted. All Rights Reserved.
Rain at a Funeral: What Does It Symbolize?