Muslim funerals often include traditions steeped in community connectivity and prioritize treating the deceased individual with high levels of respect. Understanding Muslim funeral traditions can prepare you if you plan on attending one, or are just curious about their customs.

Rituals Before the Funeral Service

What Happens in a Muslim Funeral?

A Muslim funeral may also be referred to as an Islamic funeral as Muslim individuals practice the religion of Islam. Muslim funerals may take place in a mosque, in an outdoor space within the community, a funeral home that can accommodate Muslim traditions, graveside, or in a prayer room. All community members, regardless of relationship with the deceased, are traditionally expected to come. Muslim funeral services may include:

How Do Muslim Individuals Get Buried?

Burial tends to occur very quickly after someone has passed away, and cremation is not typically allowed. Individuals are typically buried in a grave within three days and ideally within 24 hours of passing away. Muslim individuals do not typically embalm deceased individuals, therefore a quick burial is desired. Typically, male individuals carry the shrouded body to the grave after the service and place it sideways in the grave facing right towards Mecca. 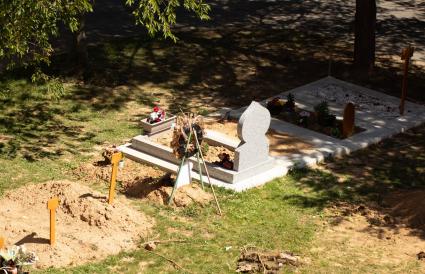 How Long Does a Muslim Funeral Last?

A Muslim funeral typically lasts anywhere between 30 to 60 minutes, which consists mainly of funeral prayers and a burial. The mourning period begins after burial.

Both Muslim and non-Muslim individuals may attend the funeral, however in some communities Muslim women are not invited to attend the funeral or burial. Keep in mind that there can be funeral and post funeral nuances that vary depending on the community's traditions. This means that funerals can range from very traditional to less traditional. In general, video recording and taking pictures are not allowed.

In general, crying is acceptable at the funeral, as well as passing on your condolences to the family in mourning. Yelling or crying very loudly is not allowed, and it is believed that the deceased individual does not like this and may experience distress if done. Crying is allowed for up to three days after someone has passed away, with rules differing if a woman loses her spouse, under the period known as Iddah.

Flowers and gifts are not typically brought to the family in mourning prior to the burial, however bringing food to the family is a common practice. Be sure dietary restrictions are followed and respected. After burial, gifts and food are more commonly accepted.

What to Wear to a Muslim Funeral

Muslim funeral attire may include modest clothes in subdued colors, closed toed shoes and dark colored socks or stockings for anyone attending. White clothing may also be an acceptable choice. Wearing jewelry, patterned clothing, makeup, or bright colors should be avoided. Women and men should cover as much skin as possible and clothing should be loose fitting. Headscarves are typically worn by women that cover most of their hair and neck, and non-Muslim women may consider wearing one as well as a sign of respect. 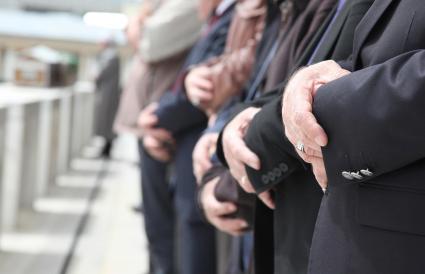 After the funeral, the family accepts visitors into their home to pass on their condolences. It is customary for visitors to bring over a meal for the family. Visiting takes place after the funeral and typically for a total of three days, although different communities, religious preferences, and family values will influence how long the mourning period goes on.

Muslim funeral traditions can range from traditional to contemporary based on a number of factors. If you are attending a Muslim funeral and aren't sure about how to uphold certain traditions or etiquette, reach out and ask ahead of time.