Families, friends, and healthcare workers report some common spiritual signs that death is near. Most of these reports describe specific experiences of the dying that can be taken as spiritual signs of an impending death.

Deathbed Visions Are Spiritual Signs That Death Is Near

Visions of the Spirit World

This process allows brief glimpses into the next world where it is believed the person's spirit will go. The dying person making the transition between the physical world and the spiritual world often describes a beautiful, peaceful place.

Angels and Other Spirit Visitations

Many people describe seeing angels or other spirits. Witnesses have seen the dying person have conversations with entities only they can see. These accounts are often discredited and blamed on drugs or other chemical processes taking place in the person's brain. But what if these are in truth spiritual signs that death is near?

There are many reports from the dying of receiving visitations from deceased family members. Some families have a long-standing tradition of such visitations. Many people believe that deceased loved ones visit the dying as a way to reassure and comfort them that life continues after death. It is possible that many people experience such visitations but never tell anyone for fear of ridicule or reactions of disbelief. The following story of a visitation comes from the author, Sally Painter.

Sounds of Angelic Music and Singing

There are many reports of those dying who claim to hear music playing that no one else can hear. Some claim to see and hear angelic choruses singing.

Some people who are dying claim to see religious figures from their spiritual faith. For example, a Christian may claim to see Jesus or the Virgin Mary.

Healthcare professionals, especially those serving the hospice community, claim they can sense when death is near. Hospice workers recognize common signs of dying.

Healthcare and hospice caregivers report noticing the dying person often withdraws into themselves as though entering a different world. Some people report seeing into another world or dimension. 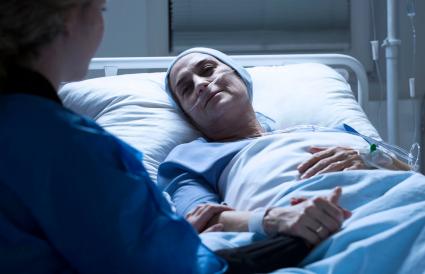 Some deathbed experiences include what's known as out-of-body experiences (OBEs), where the person who is dying finds themselves floating above their body. A similar experience is often reported in a near-death-experience (NDE) when someone has died and been resuscitated.

Person Dying Can Feel Their Soul

There are also reports from people who are dying of feeling the separation of their soul from their physical body. In such instances, the person feels their body functions slowing down and themselves in spirit form slipping free of their physical body. For some people, this is a process that can last over a short or extended period.

Dreams May Indicate Death Is Imminent

Perhaps the most common spiritual signs that death is near come from dreams.

Prophetic Dreams That Foretell of Death

Many psychics, mediums, and loved ones experience prophetic dreams that foretell the death of a loved one. Sometimes, the dreams are vague, and the person doesn't know who is going to die, only that there is an impending death.

Dreams of the Afterlife

People who are dying sometimes report having dreams of visitations from angels, religious leaders, and deceased family members. Perhaps these are other ways the spiritual realm comforts the dying person and shows the path to the afterlife.

There are several common spiritual signs that death is near reported by the dying and the living. You can give comfort to someone dying by letting them feel safe in sharing their spirituality and any spiritual signs they have about their death.