The traditional Hispanic culture of death and dying reflects their values, religious faith and their high regard for families. There are various Hispanic death rituals and ceremonies to honor the deceased that are deeply rooted in their cultural heritage and still practiced today.

In Hispanic culture, relationships with immediate and extended family members are very important. Family members look to each other for emotional support during difficult times. Part of this support is in the form of family members caring for loved ones who are ill or dying as opposed to looking to professional caregivers to take on this role.

Caring for the Dying

In traditional Hispanic families, the bulk of care provided for a terminally ill family member is performed by female relatives who are unlikely to ask for outside help to cope with the stress of looking after someone who is close to death. Some Hispanic families may resist the idea of placing a seriously ill family member in a nursing home or other type of facility. Ideally, the ill person is cared for at home until he or she passes away with a family member remaining by their side until the end. Spending time with a family member who is close to death also allows relatives to resolve outstanding issues within the family.

The news that a family member is seriously ill may trigger anticipatory grief in close relations. The surviving family members start to experience feelings of loss before their loved one dies. While it is acceptable for women in this culture to show emotion after someone dies, they may not feel comfortable breaking down in front of the terminally ill patient. The knowledge that a person will die combined with the uncertainty of not knowing when the event will happen can be very stressful for family members.

The majority of Hispanics are Roman Catholics. The Church teaches that the soul is eternal and continues on after the physical body has died. This religious faith also treats all human life as sacred. Pain and illness may be seen as a test of the individual's and the family's religious faith. In some cases, the patient's and family's faith in God may interfere with the patient agreeing to comfort measures, such as pain medication, that might make him or her feel more comfortable. The family of a seriously ill individual may reach out to the local priest for support in the time prior to death; once the person has passed, the priest will provide support and assistance with funeral arrangements.

A Catholic, on his or her deathbed, is given last rites by a priest and is anointed with holy oil for this purpose. The priest hears the dying person's confession and offers absolution. The patient, when able, receives Communion and a blessing from the priest.

Once a Hispanic individual has died, and the body has been prepared for burial, the family will hold a wake. In this culture, the wake is much more of a social event than the traditional one in which family members sit somberly with the body until the burial. Instead, this is a time for friends and family members to share memories of the deceased. Food is served during the wake and some attendees play cards or dominos. Conversation turns to remembering good times and laughter is part of the occasion. Flowers and candles will be placed in the room where the visitation is being held.

The funeral rituals that typically occur include:

The funeral process will likely include a Mass held in a church. The casket carrying the deceased is transported to the location and close family members take part in a processional as it is moved close to the altar. Open expressions of grief are acceptable for females in this culture. For men, breaking down after death is not the norm. They are expected to be strong and keep their emotions in check.

A traditional burial usually follows the church service. While traditional burial is still most often practiced, cremation is now an option. However, the cremated remains must still be buried. According to beliefs in this culture, the dead return on certain days of the year and are remembered through special events. The body must be buried in order for this to occur. Friends and extended family members commonly accompany the immediate family to the cemetery for the internment. Afterward, the mourners gather for a meal and reception. This time is for comforting those who are dealing with their grief and to share stories about the deceased.

What to Wear to a Hispanic Funeral

Since most Hispanic funerals are likely to be held in a Catholic church, it would be advisable to follow their guidelines as to what the appropriate funeral attire would be. Some suggestions include:

Cultural Differences Around the World

The Hispanic cultures around the world do have a common belief system when it comes to death and dying, however, there are differences among them as well. Some of these funeral rituals and traditions include:

It is customary for the people of Mexico to embrace death as a part of life, therefore there will often be long periods of mourning and elaborate funerals in order to say goodbye to their loved one. Mexican funeral customs blend beliefs of their native traditions with the Catholic faith. Typically, a Catholic funeral service will be held and later the family will celebrate their loved one in their native traditions. A ritual observed by all Mexicans is "The Day of the Dead" (Dia de Los Muertos) which is a celebration to honor those who have passed. The skeletal characters represent a call to revolution. The theme is to leave your life for a new one and these rituals that are practiced help the dead make the transition. 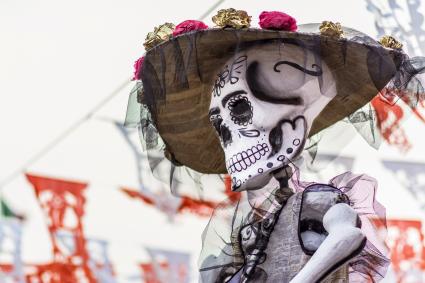 Cuban funeral rituals and beliefs on death and the afterlife often combine the Catholic religion and the practice of Santeria. Catholicism has the theology of heaven whereas Santeria believes in the survival of ancestor spirits. Funerals may have religious imagery but are more commonly a secular ceremony where the person is remembered for his or her contributions to the socialist project. Typically, when someone of lesser means dies, it is a very quick burial process. Because of Cuba's hot weather and lack of refrigeration, (refrigeration is only used for VIPs) the deceased must be buried in the ground within 24 hours. Funerals are free in the socialist state as is education and health care. There is a charge if cremation is desired.

Puerto Ricans tend to be predominantly Catholic. While they base their ceremonies (funerals, weddings, baptisms, etc.) on the Catholic faith, they often deviate from the typical rituals and practices. One such example is "standing funerals". This allows family and friends to be with their loved one as they would in everyday life. Instead of laying in a casket, their loved one may be seated, standing, playing cards, on a motorcycle or dressed like a superhero, for example. Some funeral directors believe this practice is sacrilegious while others believe it is a unique way to remember and honor their loved one.

In Spain, many deaths happen at home. The family is able to prepare for the death of their loved one week in advance. When death is near, communion or last rights are offered to their loved one. Once they have passed, the burial typically takes place within 24 hours to 48 hours. Since cremation is not common, the usual burial method is in an above ground family niche that is rented for an allotted amount of time. When the time is up if the family does not want to continue to pay for the rental of the niche then the body will be moved to a common burial ground. A "rosario" is held nine days after the death of their loved one. A rosario is a special ceremony that involves flowers, candles, prayers and the sharing of memories. Every year, the family will hold a rosario on the anniversary of their loved one's death.

In general, the funeral traditions in Central America blend their native beliefs with Catholicism. Typically, when someone dies, they have a Catholic mass and a standard burial. An example of a native belief is the tradition they have in Honduras of holding a large drum party to honor the deceased one year and one day after his or her death. This is a tradition that goes back to the African roots of many people in the country. This celebration is held later in order to save money and pool finances. The drummers are hired and will continue drumming as long as the food, drink, and money last, which can be for days. This celebration is to help elevate their loved one's spirit so spiritual evolution can take place. There is also another belief called hejillo. This is when people touch the dead body and they believe they contract a mystic contagion and must immediately wash in order to purify themselves. 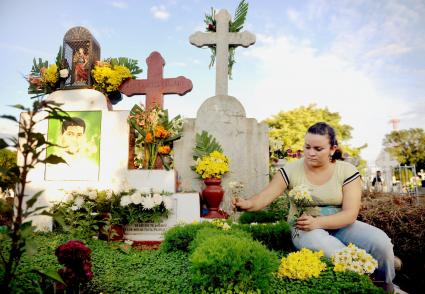 South America is mostly Catholic and does follow the rituals of the church, however, they do tend to bury their dead as soon as possible. A funeral is an elaborate and expensive event in South America and will actually cost more than a wedding. Most of the country also believes in ancestor worship. On the anniversary of their loved one's death, the family will hold holy masses to carry on the tradition of their ancestors. Those who choose not to participate in the mass may be snubbed by family and friends of the deceased.

There is a common funeral tradition practiced in the Caribbean (primarily in Belize, Grenada, Dominica, Barbados, Jamaica, Guyana, Trinidad, Haiti, and the Dominican Republic) called Nine Nights (or Dead Yard). Nine Nights is basically an extended wake that lasts for nine full days and has roots in African religious tradition. Family and friends of the deceased come to the home, share memories and condolences, sing hymns and eat food together. It is not meant to be a time to mourn but a time celebrate. The ninth night is the night before the funeral service. The tradition is that on the ninth night the spirit of the deceased passes through the celebration and says goodbye before moving on to his or her final resting place.

Spirits Live On After Death

The Hispanic culture of death and dying believes that death is a part of life and when a person passes, he or she has simply moved onto a different stage of life. They believe that their loved ones continue to live on in spirit and are still very much a part of the family.

Comments
© 2006-2021 LoveToKnow, Corp., except where otherwise noted. All Rights Reserved.
Hispanic Culture of Death and Dying