The Hindu belief in reincarnation guides the death rituals of funeral traditions. Some families, castes, sects and subsects may have a few variations. However, the basic funeral rites are observed.

The Hindu religion teaches that death is a natural part of a continuous cycle of rebirth. Upon death, it is believed that the soul reincarnates into another body. However, the ultimate goal of this death and rebirth cycle is for the individual soul to grow spiritually and achieve Nirvana in order to escape this cycle of reincarnation.

A long-standing tradition is for Hindus to die at the home. This isn't always possible for those confined to hospitals. However, many Hindus take terminally ill family members home to die. This practice allows the person to have a peaceful death with their loved ones in attendance, maintaining a vigil until death.

The deathbed rituals and practices often include various songs, scriptures, prayers, chants, and traditional family rituals. If the loved one is confined to a hospital, these rites are usually observed and performed in the hospital room.

Hindu Death Ritual for Dying in the Home

The person is positioned so their head is pointed east. A lamp is lit as the time of death draws closer. If conscious, the dying person will concentrate on a specific mantra. At their passing, a family member whispers that mantra in their right ear.

Why a Dying Person Is Placed on the Floor

Some Hindus still practice the placing of a dying person on the floor. This ancient practice is based on the belief that this connection with the earth, albeit a floor, enables the soul to leave the body easier.

Basil Leaf and Water From the Ganges River

Moving the Body After Death

Some Hindu traditions requires the body of the dead person to be moved so it is in the entryway of their home. The deceased is placed so their feet pointed toward the south, which is the direction of the god of death, Yarma. Other traditions allow the family to decide where the body will be placed. Oftentimes, the body is placed in the bedroom of the deceased, always on the floor.

Traditionally, the Hindu funeral rites should occur before the next sunrise or sunset, depending on which one occurs first. This may vary for any number of reasons and many families observe the funeral happening within one day of the death. However, there are times when it may be necessary for the funeral to be performed up to two days following the death.

Preparing the Body for Funeral Rites

No one touches the body since it is considered to be impure until a ceremonial bath is performed by a family member passing an oil lamp over the body. This ceremonial bath is considered a cleansing practice. Once completed, the body is washed. This can be with water or a combination of milk and honey. It's then anointed with oil. The body is then wrapped in white fabric unless the deceased is a married woman. According to Everplans, a married woman is dressed in red.

Everything in the house is cleaned. Any cooked meat and eggs are given away, so there are none in the home. The family meals from this point forward for 13 days will be purely vegetarian. 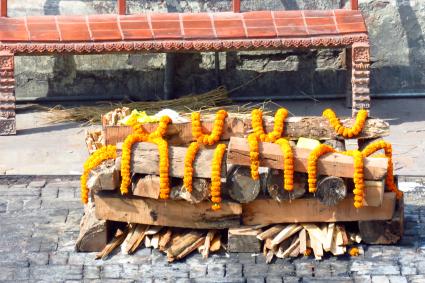 Sleeping on the Floor

Accommodations are made for family members visiting from out-of-town. The courtyard (if there is one) is used to host communal meals for family and friends. At night, the courtyard is transformed with canopies and mattresses for the men's sleeping accommodations. The women and children sleep inside the house.

Changes in Household for Widows

The family priest decides when the funeral will begin, usually the following morning. In Hindu, the role of priest is inherited. The priests keep extensive records of the families they serve as the spiritual advisor, sometimes accumulating for hundreds of years.

Anyone who knew the deceased is socially obliged to pay their respects. Gifts of flowers and/or fruit are acceptable, but no food should be gifted. Visitors may sit cross-legged on the floor by the deceased and participate in chants, prayers and expressions of grief. No one is allowed to touch the body since it has been prepared for funeral rites. Children are in attendance since death is treated as a natural part of life.

A bier is constructed the day after the death. This is in lieu of a coffin and is a frame that the body will be placed on and then tied securely with ropes. Different materials are used to create the bier, such as jute mats and bamboo poles. The body is draped and covered with white muslin with the exception of red muslin for a deceased married woman. 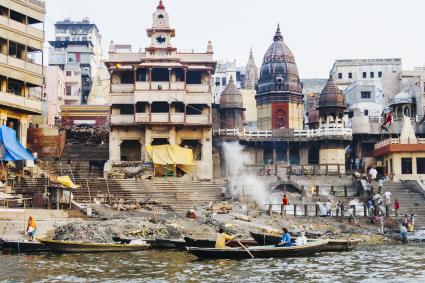 Coffin Instead of Bier

More modern funerals will use a simple wooden, open coffin instead of a bier. This makes it easier for pallbearers to carry to the creamation site.

The morning of the funeral process to the crematorium, everyone dresses in white. Flowers and garlands are secured over the body. The pallbearers carry the bier. The priest lights joss sticks and the procession makes it way to the crematorium.

Once the funeral procession arrives at the crematorium, the bier is placed on the funeral pyre and the eldest son lights it. It will take around 10 to 12 hours for the body to completely burn. 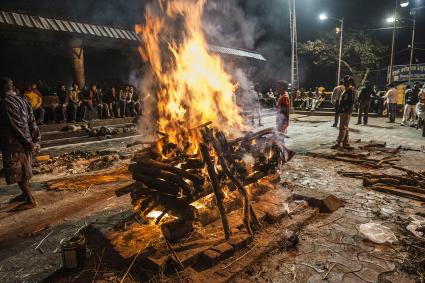 Release of the Soul

Procession to the Ganges

For the majority of Hindu, a private crematorium isn't affordable. Instead, they create a funeral pyre along the banks of the holy Ganges River. Funeral ceremonies take place along the banks daily. Family members hold vigils until the bodies are completely incinerated and then collect the ashes of their loved ones.

The ashes of the deceased are stored in an urn and kept until the thirteenth day. If using a private crematory, the urn with the ashes is delivered to the family on day 13.

In traditional Hindu practices, 13 days of greiving are undertaken. This ritual isn't always feasible for those without financial means. For those who can observe this tradition, cooks and cleaners are hired to care for the family and friends who are in mourning. Those with less means are often cared for by friends and communities. Some families pool their money to contribute to this expense and some communities contribute to the less advantaged families.

The priest(s) begin chanting and singing outside the house at first light, usually in the courtyard. The family bathes, dresses in white and gathers for breakfast in the courtyard (if they have one). Over the next 13 days, visitors drop in on the family to pay their respects.

For the next 13 days, family and friends participate in prayers that are held twice a day. One meeting is held at sunrise and the other is held at sunset. Meals usually follow each prayer meeting.

During these 13 days of mourning, the family doesn't generally leave the house. They are encouraged to mourn. In fact, a professional mourner or what's known as an experienced mourner is employed to help the family mourn. This includes encouraging and leading everyone to cry, wail and even scream out their grief. It's believed these 13 days dedicated to grieving are vital to coping with death. It teaches children at a very early age about the natural cycle of life and death. Unlike Western culture, openly grieving in public is acceptable.

Touch a Cow for Assistance

One Hindu tradition to assist the deceased in their soul journey to the realm of their ancestors is to touch a cow and request assistance. This journey includes navigating 16 rivers and 16 plains that challenge the soul.

On the thirteenth day, the eldest son or other family member travels alone to the holy Ganges River to release the deceased's ashes. The ceremony is conducted by the priest along the riverbank. The family member disrobes and carries the cremation urn filled with the loved one's ashes into the water. He then cracks the seal and pours the ashes into the river.

When he emerges from the river, he dresses in a new set of clean white clothes and sits on a white cloth spread over the ground. The family priest lights a fire in tribute to the god Ganesh. Ancient Sanskrit prayers are usually recited in this hour-long ceremony.

Final Act to Feed the Needy

Traditionally, the last task for the eldest son or whoever does the immersion of ashes is to feed 350 needy people. The priest makes the arrangements with a local restaurant. This final act is truly something only the affluent can afford. Since this is financially impractical for the majority of people, some Hindus host a meal at their home for family and friends to pay tribute to this tradition as a way to further honor of their deceased loved one. Once the meal is over, the Hindu funeral rites are completed.

One-Year Anniversary of the Death

The first-year anniversary of the death is marked by a priest performing Shraddha rites. This ceremony is performed in the home of the deceased to honor the passed loved one. This rite can be performed every year, if the family desires.

Hindus Not Living in India

Depending on where practicing Hindus live, following all of the traditional Hindu death rituals may not be feasible. Some Hindus may choose to embalm their loved ones over cremation, though this option is rarely taken. Due to different country regulations, attending the cremation may not be possible. These are all considerations for a Hindu family planning a funeral and should be discussed with the funeral director. Compromise may be necessitated due to various legal regulations.

Observing Hindu death rituals can be challenging in a modern world of hospitals and varying regulations governing cremations and funerals in different countries. Traditional Hindus seem to find ways to overcome these obstacles to stay true to their faith and heritage.