Buddhists sayings about death make it clear they believe death is part of the process of life, which occurs in a cyclical pattern of death and rebirth until a person reaches Nirvana. Meditation on the purpose of death is encouraged as a means to prepare for one's final moments with a calm and peaceful mind and reach Nirvana to end the cycle of rebirth.

Buddhists acknowledge the certainty of death as something that will happen to all living things. When you can accept this truth, you will live a more fulfilling life.

For those practicing Buddhism, death is not something to be feared. These quotes and sayings capture this ideal view of death as a part of life you can conquer with a peaceful mind.

In a quick overview of Buddhist beliefs on death from the BBC, quotes from the Buddhist scriptural texts are shared. "Long is the cycle of birth and death to the fool who does not know the true path," reflects on the idea of escaping from the cycle of death and rebirth by achieving Nirvana. Those who achieve enlightenment will no longer see their energy reborn over and over.

Death as an Opening

The Tibetan Book of Living and Dying by Sogyal Rinpoche shares the thought, "Perhaps the deepest reason why we are afraid of death is because we do not know who we are." When a person does not know what they stand for and their purpose, they may be afraid to die because it means the end of their time to figure out these states of being. If you have a deeper understanding of yourself and your purpose in this world, you can greet death as the path to something more.

In the phrase, "Even death is not to be feared by one who has lived wisely," Buddhists further explore how death is not a scary final end, but a part of gaining wisdom. Those who meditate and follow Buddha's teachings gain wisdom beyond their own sense of self and realize the importance of death. This time is important not only to the sense of self, but in the world as a whole. People who gain this knowledge through contemplation will not fear anything because it all serves a greater purpose. 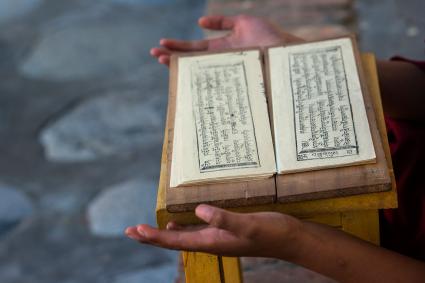 The Tibetan Book of Living and Dying shares, "Death is a mirror in which the entire meaning of life is reflected." Because of this sentiment, Buddhists spend their lives working to understand who they are and what is important about life and death personally and in general.

Each person in Buddhism is viewed as an energy rather than a body or soul. This energy flows through life and death until it gathers the wisdom to reach enlightenment. Regardless of whether you're a Buddhist, these sayings and phrases about death can help make the inevitable experience less daunting.