Customs play a significant role in mourning and remembering the life of the dead. For example, you may notice someone has left coins on military graves, or you may see them resting on headstones or grave markers. Understanding the history behind leaving coins on graves is essential for making sense of this tradition.

Leaving Coins on Graves Is a Rich Tradition

Cultures around the world have different methods for mourning the loss of a loved one. While leaving coins on graves today is often associated with the military, the tradition actually occurs throughout history as a means of bringing good luck to the deceased and aiding them in their journey to the afterlife.

The concept of the afterlife for the ancient Egyptian was of a paradise where people lived eternally. Since the Egyptian believed heaven to be a paradise built for eternal living, their understanding led them to conclude that heaven would be a mirror-image of life on earth. Egyptians were often buried with everything they owned. Coins were placed over their eyes, partially to keep them from seeing the evils of some in the afterlife and partially to boast in the amount of money owned. 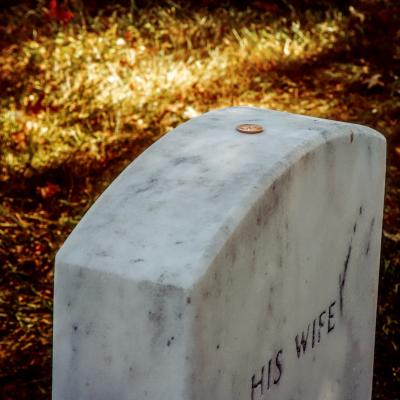 Archeological evidence shows that Jewish customs also used coins placed upon the eyes of the deceased for burial practices. Rarely did Jewish traditions leave coins on graves, rather their habit was to place stones beside a grave. Marking a grave with a stone, using an inscription, was common. Visitors to the grave left small stones as a sign of respect for the dead and to represent that the grave had been visited. Jewish customs had mourners giving coins to charities the deceased has supported.

Greeks placed a coin, called an obol, in the mouths of their dead. The obol was worth about one-sixth the value of a drachma. The first obols were struck on Aegina, probably sometime after 600 BC. The Greeks believed that the land of the living was separated from the underworld, or the place where the dead go, by the Styx and Acheron rivers. When a person died, they had to travel to the underworld by boat, and they needed money to pay for their passage.

In Greek mythology, the Underworld, the place where the dead go when they die, is a land ruled by the god Hades. People did not magically appear in Hades but had to travel through the rivers in a boat to get there. The ferryman of Hades was Charon. Charon did not take passengers aboard his ferry for free. According to the Greek stories, Charon required the price of one obol for his service. If Charon did not get his obol, the myth explained that the soul would be doomed to wander and haunt the earth for hundreds of years before permitted to cross.

Meaning of Coins on Military Graves

Coins placed on graves may convey a variety of messages, but today they often have a military significance. The tradition of leaving coins on the gravestones of fallen military men and women dates back to the Roman Empire. In America, the practice became common during the Vietnam War. Because of the extreme political divide over the war, leaving a coin was seen as a quiet indication that the grave was visited. Different coins carried a different significance. 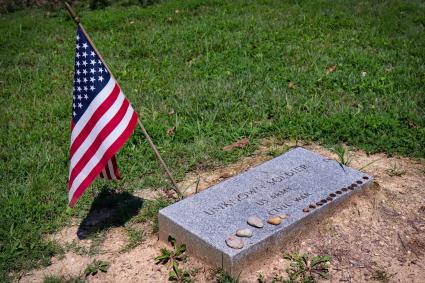 When a penny is left at the grave, it simply means someone has visited the site. The person leaving the coin is paying honor to their service and to their family. They probably have no military connection, nor do they have a relationship with the deceased. It is the equivalent of saying, "Thank you for your service."

Leaving the five-cent coin at the grave shows a slightly stronger connection to the deceased. This portion of the tradition varies from area to area, with some seeing the association with the branch of the military ("We were both in the Marines") all the way to serving at the same boot camp ("We both trained at Camp Smith").

When leaving a dime is the choice, it indicates a more personal connection. Instead of serving in the same branch of the military, a dime means that the deceased was a comrade ("I was stationed in Guam at the same time as Joseph").

The gift of a quarter carries the deepest significance. It represents that the leaver was actually with the deceased when he or she died.

A Practical Way to Honor the Deceased

Cultures around the world support traditions of leaving something after visiting a grave. Flowers, food and other items are left to show respect. Coins are less expensive than other gifts, allowing a greater participation while still showing honor and respect. The practice of leaving coins in the United States can be traced back to Colonial America.

What Happens to Coins Left on Graves?

Coins left on the grave usually go for a good purpose. Some of the coins are used for the upkeep of the cemetery and gravestones. Other portions of the money go to help pay the burial costs for veterans whose finances are limited. Ultimately, the coins all go to pay respects to the families of individuals who have given their life in service for the country.

When you see coins on a grave, reflect first on the life that was selflessly given. Remember the long line of traditions that provide the foundation for honor and respect for the deceased. The handful of pocket change emphasizes to all the incredible value of life.

Comments
© 2006-2021 LoveToKnow, Corp., except where otherwise noted. All Rights Reserved.
Behind the Tradition of Coins on Graves