Azrael, angel of death is prevalent in a few religions. Depending on the religion, Azrael is either portrayed as a servant of God or as a fallen angel that serves Satan.

In both portrayals, Azrael, angel of death, decides the fate of the dead. He keeps a record of each soul and escorts them to their destinations. The destinations aren't always the same in each religious doctrine.

Judaism and Azrael, Angel of Death

Judaism portrays Azrael, angel of death, as the determiner of mortal souls. He carries a scroll that he used to record each person's life. The Hebrew meaning of the name Azrael is help from God or Angel of God.

Even in Judaism, there is a conflicting portrayal of Azrael. According to the Jewish Virtual Library, the text clearly states that God rules over life and death. However, death is often portrayed as an autonomous being who sends out angels as his own emissaries, not God's, to collect souls. Religious scholars argue this is purely a symbolic personification of death that evolved over the course of time.

Is the Angel of Death Good?

Another depiction of Azrael is of a good angel that greets those arriving in heaven. A kind Azrael listens to the prayers of the faithful in this gentler version of the elusive supernatural entity often described as an angel. 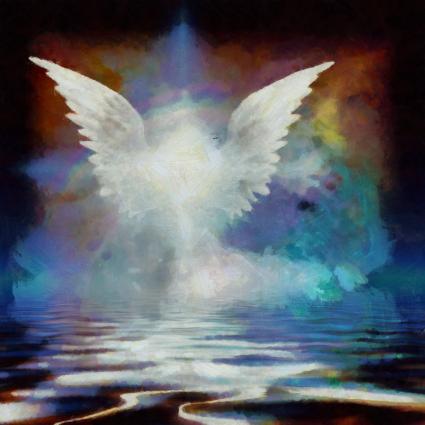 Malakh, Angel of the Lord

Another conflicting imagery discusses Malakh, an Angel of the Lord. Malakh is described as having the God-given power to destroy and smite humans. In fact, it is this very power that supposedly earned him the nickname of The Destroyer. To add to the confusion, the text doesn't designate the Angel of the Lord as one permanent angelic messenger. In fact, it is suggested that the role is a temporary, and it is implied that God chooses a special envoy for a specific mission of destruction and most likely is a different angel each time.

Is Azrael a Fallen Angel?

To further complicate the true nature of the Angel of Death, the Talmud describes the Angel of Death as Satan or at the very least a supernatural demonic power. It is the same evil power that seduced and destroyed Adam's Godliness and purity. With an unrelenting vengeance, this demonic energy seeks out all of Adam's descendants to destroy them. In other words, all of humanity. Of course, this scenario removes any culpability of Adam and places humanity in a hopeless victim role, since death always finds each person.

Azrael in Islam, the Angel of Death

Islam categories Azrael as one of the four archangels. In the Qur'an, Azrael is called Malak al-Maut, Angel of Death. According to the Qur'an, only God knows the time of death for a person, and God gives the death notice to Malak so the angel can remove the soul from the body to give it back to God. The righteous are given a wide grave to view heaven until the time of judgement day. However, a martyr (jihadist) goes directly to heaven. Azrael is described as having one foot in the fourth or seventh heaven. The other he balances on a bridge that separates heaven (paradise) from hell. This bridge is described as being razor sharp.

Sikhism and Azrael, Angel of Death

In Sikhism, Azrael (Ajrail) is also portrayed as the Angel of Death. However, only the unfaithful and those who refuse to repent are collected by Azrael. The methodology is very specifically described. Azrael adopts human form, so he can surprise the sinful by striking their head with his scythe, thereby freeing the soul from the body. Once the Angel of Death has retrieved the soul, he takes evil-doers to hell where the soul is judged and then punished. He delivers the righteous and followers of God to heaven.

Christianity and Angel of Death

Medieval Concept of Angel of Death­ 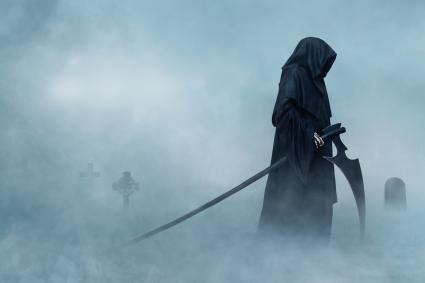 It could be that the mid-1300s Black Plague that swept through Europe helped to solidify the concept of the Angel of Death as the Grim Reaper. By the time the Plague ravaged Europe, the imagery became more frightening and foreboding. Death was a being that wore a black hooded robe and carried a scythe.

Other Descriptions of Azrael Angel of Death

In addition to the Grim Reaper persona and scary appearance, religious texts give some highly disturbing descriptions of Azrael. In fact, the descriptions are often interpreted as symbolic instead of literal. For example, Azrael is said to have four faces, 4,000 wings and 70,000 feet. He also has a body that is covered with eyes and tongues, one of each for each person living on Earth. This grotesque description is usually accepted as a metaphor used to convey how death is all-seeing and travels everywhere. The image conveys the reality that no one can escape the Angel of Death.

It is easy to see that different religions have varied concepts about Azrael, as the Angel of Death. However, all are in agreement that death is inevitable.