Buddhists believe that at death, a person goes through a process called samsara, or reincarnation, and can be reborn as a god, demigod, human, animal, hungry ghost or hell creature, depending on his thoughts and actions during life. While Buddhism doesn't require specific practices at death, the rituals that do take place focus on helping the individual achieve a better station in the next life. In Buddhism, burial and cremation are both practiced.

Buddhists believe that death is a natural part of life and that its final moments can significantly impact the individual's rebirth. When death is imminent, Buddhists focus on caring for the individual's mental and spiritual state, rather than unnaturally prolonging his life, to encourage a good rebirth. To that end, Buddhist end of life rituals center around keeping the person calm, peaceful, and focused on the good deeds performed during his life.

Relatives will place images of Buddha and flowers around the room to keep the person calm in the face of death. Not only does this create a calm, peaceful environment, but helps maintain the focus on religious thoughts and the good deeds performed during life. A mandala blanket, used during meditation, may also be used as a visual to help keep the person focused on good deeds and religious thoughts.

The family or friends may ask a monk to come and chant verses or read prayers, which helps the individual remain calm and peaceful in the face of his impending death. The monk can also encourage the dying person to focus on the good deeds performed during his life.

It is not uncommon for the dying or his family to bestow gifts to the monastic community to curry good favor.

Performance and Transfer of Good Deeds

Family and friends may perform good deeds in the dying person's name (if possible, the person should acknowledge the actions). These good deeds are transferred to the dying person, in the hope of achieving more merit at death for a better rebirth.

Even though there are many forms of Buddhism, the belief in reincarnation is shared. It is believed that death is the transition from this life to the next. The Buddhist funeral customs are very diverse and vary between Buddhist sects and from one country to another. The funerals themselves can be very traditional and ritualistic or simple and dignified. But the most important aspect is that the customs and rituals of the Buddhist death ceremony are hallmarked by peace and serenity. Some of these customs and rituals include:

What Colors Are Worn at a Buddhist Funeral

Since Buddhism is practiced by a diverse range of people from many cultures, the attire will differ accordingly. But some traditional colors worn will be the same which include:

The color of the clothing worn at a Buddhist funeral is more important than the attire itself. While the clothing should be simple and respectful, it should not be too informal such as black jeans and black t-shirts.

Like those performed pre-death, post-death rituals and Buddhism burial practices are intended to aid in attaining a desirable rebirth and give merit to the deceased. Some rituals are general to Buddhism, while others are practiced only by certain cultures.

Buddhists believe that chanting texts from Buddhism will generate merit that can be transferred to the deceased and help him in his rebirth. A few examples of chants for the dead are:

Cloth of the Dead

Theravada Buddhists (those from Sri Lanka, Myanmar, Thailand, Laos and Cambodia) can incur good favor for the deceased by offering the monks white cloth to be used in the creation of robes. The merit generated by this deed is transferred to the deceased by pouring water into an overflowing cup while performing chants.

Buddhists in Thailand and other Southeast Asian countries practice these rituals.

In addition to the offering of cloth to the deceased practiced by Theravada Buddhists, Sri Lankan Buddhists have several other death rituals to aid the deceased in his rebirth.

Tibetan Buddhist death rituals follow the tradition of earning merit for the deceased but were also born out of practicality. 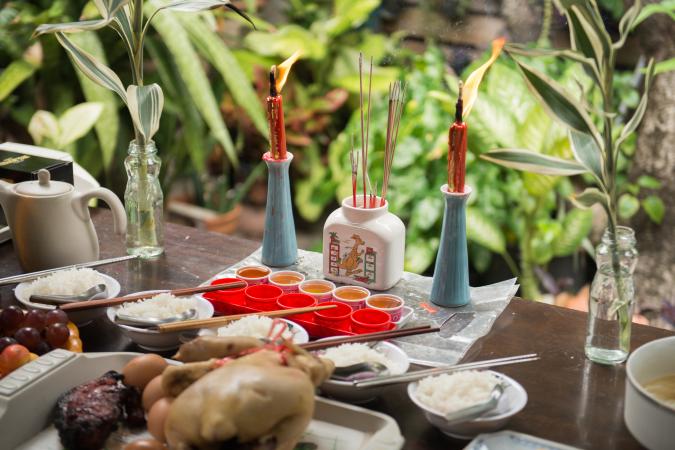 Chinese and Laotian Buddhists celebrate Ghost Month, a time when the gates of hell are opened, and hungry ghosts are thought to walk the earth in search of food and gifts. During this time, friends and relatives offer food, incense, paper money and other gifts to the deceased spirits to garner good merit for their loved ones. Paper lanterns in the shape of lotus flowers are also placed in lakes and rivers to guide the way for the spirits.

The ultimate goal of Buddhism is for every individual to become free of samsara and achieve enlightenment, or nirvana. This state can take many lifetimes to achieve. Until then, Buddhist death rituals help those practicing the faith attain a good rebirth to aid them on their journey.