Burial traditions and practices differ in cultures around the world. One tradition causes many to wonder, "Why are people buried without shoes?" The practice finds rationalization in both practical and philosophical backgrounds. The fascinating logic behind the behavior leads to better understanding of tradition.

Why Are People Buried Without Shoes?

The process of dressing the dead in preparation for burial takes into account the visitation or wake prior to the funeral. Dressing the body in formal clothes, such as a nice dress or suit, had been the practice for years. Recently, more families are choosing to dress their loved ones in more casual clothes, more like they would wear every day. The reason for not including shoes is often practical.

The Feet Are Not Seen

The bottom half of a casket is usually closed at a viewing. The deceased can only be seen from the waist up. The need for socks and shoes to be used as a part of the clothing for burial was not as great.

On another practical level, putting shoes on a dead person is not an easy task. The shape of the feet can change dramatically after death. Rigor mortis and other body processes make the feet larger than usual and often distort the shape. Many times the shoes of the deceases no longer fit. Even with the correct size, the feet are no longer bendable, making it a challenge to place shoes upon them.

Shoes Are Not Eco-Friendly

Another reason for not using shoes in the burial is based in the ecology. Because of the desire of many to have a more green burial, the deceased is wrapped in a shroud or clothing made of natural fibers. The natural materials biodegrade and do not release harmful chemicals into the earth. Shoes are often made of leather, rubber, or artificial fibers which biodegrade much more slowly and can release chemicals into the soil. 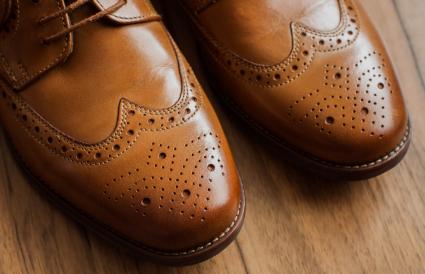 Since the middle of the 20th century, companies have produced special burial slippers that can be used. The loose material easily stretches over the strangely shaped foot. Laces in the back help the fit, and more recently more natural fibers have been used.

Other Beliefs Behind the Practices

Shoes and feet are often used as metaphors describing the journeys of life and death. Many cultures have traditions regarding death and the need for shoes. Nestled somewhere between philosophy and superstition, traditions about burial in shoes often dictate the practices.

The connection between death and disease has been evident through the ages. Some cultures express concern that disease rests in the clothing of the dead. The Jewish culture has many burial customs, some regarding footwear and disease. Many customs developed throwing out or burning clothing to stop the spread of disease. Shoes were included in the discarded items, removing them from use in burial.

In the days prior to funeral homes, the deceased was often dressed for viewing in their home. Family and friends would come to the house to pay their respects. In many circumstances, the dining room table was the easiest place to display the body. Since the bodies were dressed in shoes in those days, superstitions grew that placing shoes on the table was symbolic of death. Other traditions developed that if a living person wore the shoes of the deceased, death would soon visit them.

In the Middle Ages, feelings about the shoes of the deceased was quite different. Many people would make a provision in their will for passing on shoes and other items of clothing to family members. The practical nature of the tradition was economic, but also there were personal sentiments. At the time, people believed that shoes contained the nature and characteristics of their owners. Passing on shoes to family members also meant passing on the good traits of the deceased.

Through the centuries, more cultures used shoes in burial preparation than did not. Because death was seen as a passage into eternity, shoes were needed to make the journey more comfortable. Shoes also provided protection if the way was difficult or prolonged.

Leaving Shoes at the Burial Site

Leaving shoes or boots at the burial site appears to have been an ancient tradition. People were not buried with shoes on, but the need for shoes was perceived by most. Archeologists have found boot shaped vases among Sumerian ruins. Greeks offered terracotta boots outside tombs to aid the deceased in their trip into the Underworld. Boots could either be used or offered to the gods who could assist in the journey.

Burial practices around the world provide glimpses into the beliefs of cultures about the passage from this world to the next. Many traditions answer, "Why are people buried without shoes?" with pragmatic reasoning. These ideas continue to influence burial rituals today.

Comments
© 2006-2021 LoveToKnow, Corp., except where otherwise noted. All Rights Reserved.
Why Are People Buried Without Shoes? 7 Reasons to Know