Historical Meaning of a Funeral Train

A funeral train served the local cemeteries and were mostly found in large cities, like Chicago. These city cemeteries had reached their limit and cemeteries on the outer skirts of the city were created.

Large cities like Chicago had poorly constructed roads that were dirt. With inclement weather, they were impossible to travel, making it difficult for carriages to maneuver through them, especially a horse-drawn hearse. Funeral trains were the answer to poor roads and keeping the flow of coffins moving out of the city.

In Chicago, the city made it an ordinance that the railroad company had to supply a specific number of funeral cars and for the trains to accommodate the funerals. In Chicago and other large cities, funeral trains ran constantly carrying caskets and funeral parties to the cemeteries.

The city of Chicago laid what were known as spur tracks. These were tracks that branched off the main track and led to individual cemeteries. Special railroad cars were eventually built to carry not just the casket but the entire funeral party for a fee. Many city funeral trains operated from the late 1800s to the 1950s. 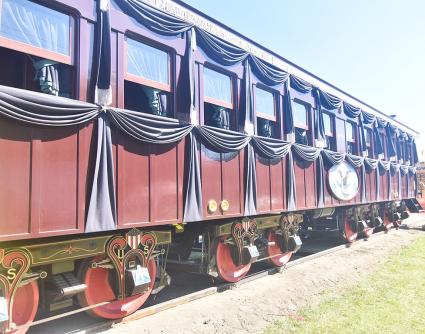 What Was the Route of the Lincoln Funeral Train?

The body of assassinated President Abraham Lincoln traveled through seven states and 180 cities. According to the Roger Norton website, the first stop was in Baltimore followed by Harrisburg, Pennsylvania. The other stops included Philadelphia, PA; New York, NY; Albany, NY; Cleveland, OH; Columbus, OH; Michigan City, IN; Indianapolis, IN; and Springfield, IL.

25 million Americans are said to have attended President Lincoln's funeral since the train made several stops for an open coffin viewing. The coffin was unloaded and placed in a federal or other public building for several hours before being loaded back onto the train so the journey could continue. 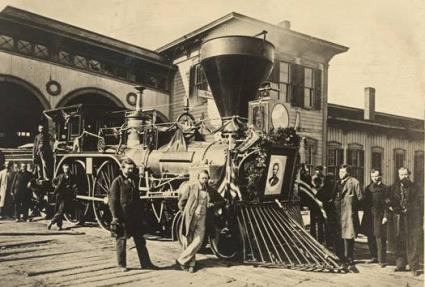 The Smithsonian describes the funeral train of President James A. Garfield, who was assassinated only six and a half months after taking office in 1881. President Garfield's body was transported by train from Elberton, NJ, to Washington, DC, and eventually to Cleveland, OH, for interment.

In 1885, after long-suffering from cancer, President Ulysses S. Grant died while living at Mt. McGregor in Saratoga County, New York. President Grant's body was taken by funeral train to Albany, NY, to lie in state at the Albany state capitol. He was interred in Riverside Park, New York City, that became a place of destination, Grant's Tomb. 1.5 million mourners poured into the streets of New York City, to witness the procession.

In 1901, President William McKinley was shot while at the Pan-American Exposition in Buffalo, NY and later succumbed to gangrene from his wounds. His funeral train arrived in Washington, DC, and after lying in state, was taken by funeral train to Canton, Ohio, for interment.

White House History describes how, in 1945, President Roosevelt died in Warm Springs, Georgia. His body was carried back to Washington, DC, by the Ferdinand Magellan train. After lying in state, his coffin was then placed on the train for his final destination at Hyde Park, New York.

In 1969, President Dwight D. Eisenhower's body was taken by train from Washington, DC, to Abilene, Kansas. The train stopped over in Cincinnati where the city had planned a funeral and continued on its way to the President's final resting place in Abilene, Kansas.

In 2018, after lying in state in Washington, DC, the body of President George HW Bush was flown to Houston, Texas, where it was placed on a funeral train accompanied by family and friends. The train traveled 70 miles to College Station, TX, where his body was interred by his wife and daughter on the grounds of his presidential library.

Understanding the History of a Funeral Train

At one time, a funeral train was a common necessity for large cities. Today, its use is mostly confined to Presidents and various dignitaries.

Comments
© 2006-2021 LoveToKnow, Corp., except where otherwise noted. All Rights Reserved.
What Is a Funeral Train? Meaning & Famous Routes