What Is a Funeral Pyre

Funeral pyres were thought to first come into use around 800 B.C. by the ancient Greeks. Funeral pyres continued to be used throughout history around the world, with some cultures continuing to use them today.

What Is the Meaning of Funeral Pyre?

A funeral pyre, sometimes called just a pyre, is a wood structure used for outdoor cremation. The pyre can be part of a funeral rite that is used to help individuals begin to process the loss of a deceased individual. Ashes may be buried, scattered, or placed in an urn after the pyre ritual has taken place. This will depend on cultural and religious beliefs, and/or the desires of the deceased individual's family.

How Hot Is a Funeral Pyre?

Funeral pyres can reach up to 800 degrees celsius. It typically takes around five hours for the body to become ashes.

Funeral Pyre in the United States

In the United States, it can be difficult to find a place to have a funeral pyre legally. Currently, there is only one location in Crestone, Colorado where this outdoor cremation ceremony is legal. At the Crestone end-of-life project, the funeral pyre includes a wooden stretcher, a half cord of wood, and a shroud for the deceased individual. Individuals who work at the Crestone end-of-life project can assist you in making end-of-life plans if open air cremation is something you are interested in for yourself or for a loved one.

Funeral Pyres Around the World

Around the world, funeral pyres have been used throughout history. 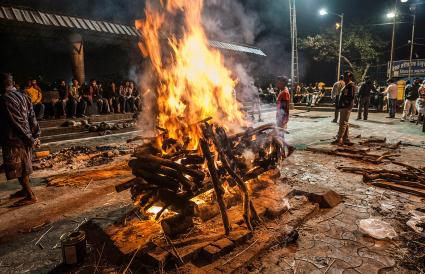 Funeral pyre legality is a complex topic as culture and religious beliefs often come into play when it comes to funeral rites and rituals. Some countries have faced pressure from the public to legalize this practice to be more inclusive of cultural and religious beliefs.

Is a Viking Funeral Illegal?

Where Can You Have a Funeral Pyre?

In the United States, there is only one location to legally hold an open cremation ceremony. In Wales and England, the Court of Appeal ruled that open cremations were legal as long as specific guidelines were met. In parts of south Asia, as well as India, funeral pyres are still utilized today.

Why Are Funeral Pyres Illegal?

In the United States, a funeral pyre would violate title 21, desecration of a human corpse. This states that desecration includes burning and is a punishable felony.

A funeral pyre is a funeral rite that has been used throughout history and is still used in some places around the world today.

0
Comments
© 2006-2020 LoveToKnow, Corp., except where otherwise noted. All Rights Reserved.
Resources, Advice & Tips for Covid-19
Read More
What Is a Funeral Pyre? History and Facts