Many words that are associated with the rites and processes of a funeral are often misused or used interchangeably. Many of the words had specific meanings which helped clarify terms and understand procedures. One of those pairs of words that is today used synonymously are the terms graveyard vs. cemetery. Understanding the differences aid to precision and accuracy in discussion.

Graveyard vs. Cemetery: What's the Difference?

What Is a Cemetery?

A cemetery is a place where the remains of dead people are buried or somehow interred. The word actually has two distinct origins. The word is often tied to the ancient Greek word, κοιμητήριον (koimeterion), which meant a sleeping place or dormitory. Sleep was used as a euphemistic analogy for death. The two became so intertwined that the term was appropriate. There are also ties to the Old French word cimetiere which had its roots in Medieval Latin cemeterium. The words literally mean a place set aside for the burial of the dead. There were no religious connotations connected with the terms.

What Is a Graveyard?

Like a cemetery, a graveyard is a place where people are buried after they die. The etymology of the word is fairly straightforward. The graveyard is a yard filled with graves. The word "grave" may be traced to the Germanic word graban which is translated to dig. A graveyard was originally affiliated with a church, often built on church grounds. They tend to be smaller due to land limitations.

Graveyard Is an Umbrella Term

Modern day usage of graveyard and cemetery is practically synonymous. Graveyard today tends to be an umbrella term describing all burial sites. Either place can be next to a church, although when either is built next to a church, they may be called "churchyards." When a cemetery was built on church property, it was because the congregation had fewer restrictions prohibiting non-members from being buried there.

Important Differences Between Graveyard and Cemetery

The differences between the two concepts can be further understood when some finer distinctions are examined. Let's look at some of the differences. 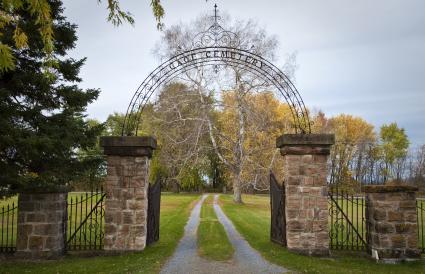 The Location and Size

A graveyard describes burial grounds that are associated with a church. Most often, the site is located on the church property, or on adjacent land the church owns. Graveyards, then, are usually much smaller than a cemetery. Cemeteries are larger pieces of property owned by the city or by an independent business.

In the early days of America, many churches were located in the cities. The churchyard often raised public health and safety concerns for the community. Cemeteries, even in cities, tended to have a more natural look and feel. Because of their popularity, cemeteries began to grow in rural areas. Many traveled to cemeteries not just to mourn, but to enjoy the landscaping and to picnic and celebrate.

Headstones are usually crafted from granite or a natural stone. The church would stipulate that the stones used would need to remain colorless and unpolished. Churches would discourage elaborate monuments. There tend to be fewer regulations in a cemetery, allowing the family to be as simple or fancy as they choose.

By the beginning of the 600's, churches had complete control over the burials. Most burials took place on church grounds. As the population of the country increased, space at the local church graveyard became limited. Cemeteries sprang up as a business venture. The cemetery was not affiliated with a particular church, which allowed anyone to be buried there.

Can Ashes Be Buried in Cemeteries and Graveyards?

Throughout the early years of American churches, the church doctrine would oppose cremation because of its belief that the body would one day be resurrected. In the days of the Enlightenment and the French Revolution, cremation became accepted as a means of protesting against church policies. Although cremation and ashes buried have become an accepted practice in most denominations, many still oppose the scattering of ashes as a burial method.

Over time, the meanings of words change to better describe the way people use the word. While the graveyard vs cemetery meanings may not actually exist today, the distinctions grew from the use of the words at different times in human history. Today the distinctions between the two are almost non-existent.