The common use of "in lieu of flowers" in an obituary is often interpreted as "instead of flowers." However, that's not always what the deceased individual's family has in mind. Understanding the meaning of this phrase and its related etiquette, as well as looking at some alternative wording ideas for memorial requests, can clarify things for everyone.

In Lieu of Flowers Etiquette

"In lieu of flowers" is a phrase often used to encourage other ways of honoring someone who has passed away, but that doesn't mean you can't also send flowers after following the family's request, as suggested by Emily Post. There are also some basic rules of etiquette you should follow depending on how you choose to memorialize your loved one.

When you follow a request to make a charitable donation in honor of the deceased individual, the size of your donation should at least equal what you would have spent on an arrangement from a florist. As far as the rest of the etiquette is concerned, be sure to:

Etiquette for Sending Funeral Flowers and a Donation

If you choose to honor the family's donation request and also send flowers, you should: 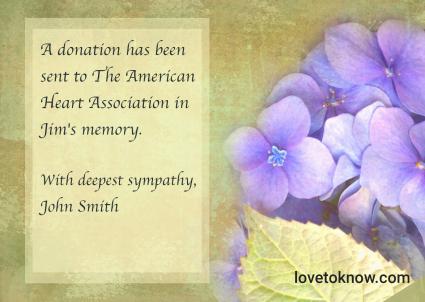 Alternative Wording Ideas for In Lieu of Flowers

Since the phrase "in lieu of flowers" is so easily misunderstood, you might want to consider using one of the following wording suggestions as an alternative when preparing an obituary. Some of these suggestions encourage those in mourning to send flowers if they wish. Other wordings don't mention flowers at all and leave the decision up to the individual about whether to send them.

Requests for charitable donations in lieu of sending flowers are quite common. Use one of the following phrases in the obituary.

A carefully worded phrase can make it clear to everyone that they have multiple options for expressing their sympathies without implying sending flowers wouldn't be appreciated.

Sometimes an obituary includes a request to donate money to help the family pay for the funeral when someone dies suddenly and/or there's no insurance or prepaid funeral plan to cover the expense. One of these phrases can help make that request clear.

Wording for Other Ways to Pay Tribute

Beyond asking for assistance with funeral expenses, donations in lieu of funeral flowers are sometimes requested to help the deceased's family in some way.

Bottom line, you can't go wrong if you respect the family's wishes as stated in the deceased individual's obituary. If you'd like to send flowers as an additional expression of sympathy, that's okay too. Follow standard etiquette so it's clear you've memorialized your loved one in a way that person's family will appreciate.