Although most Americans know about the Vietnam Memorial, facts about its history, design, and construction are less well-known. The memorial has a rich history alongside ample controversy.

Until Veteran's Day in 1982, there was no memorial for the 45,000 men killed and the almost 10,000 soldiers who went missing in action during the Vietnam War. Fundraising for the Vietnam Veterans Memorial began in May of 1979 when Jan C. Scruggs, a decorated Vietnam veteran, set aside $2,800 of his own money to start the Vietnam Veteran Memorial Fund (VVMF) fund eventually raised $8.4 million for the design and construction of the memorial, and Scruggs persuaded Congress to set aside three acres of land on the Mall for the memorial site.

Designing the Wall for the Vietnam Memorial

In October 1980, the VVMF held a design contest that was open to anyone who was a United States citizen and above the age of 18. According to the VVMF website, the contest criteria stated that the memorial design should:

The VVMF chose a panel of eight prominent designers and artists to judge the competition and choose a winner from the 1,421 entries. The final judging took place at an exhibition of all the entries at Andrews Air Force Base. The contest entry displays were identified only by number, and the panel unanimously chose entry No. 1026. Maya Lin, a Yale University student, designed the Wall and was awarded a monetary prize and the chance to assist the architect in preparing the design for its actual construction on the site.

Controversy About the Vietnam Memorial Wall

Both veterans and the general public spoke out against the winning design for several reasons. The memorial seemed to resemble a headstone more than anything else, making living Vietnam Veterans feel as if the sacrifices made during the Vietnam War were being metaphorically buried. They felt this especially keenly in the case of the 10,000 names of those missing in action during the Vietnam War.

Skeptics of the Design

Veterans felt that the U.S. government was not doing enough to rescue those who were missing in action and that adding them to the wall was, in effect, giving up the struggle to find them and bring them home. Skeptics of the chosen design also disliked the fact that it did not include a place for an American flag, and thought the design was too abstract and did not capture the heroism of the fallen veterans.

Last-Minute Additions to the Vietnam Memorial

Because of the storm of controversy surrounding the memorial's design, the VVMF decided in March 1982 to add a flagpole and an additional sculpture to the Memorial site. The Three Serviceman sculpture portrays three soldiers uniformed in Vietnam-era uniforms and was designed by Frederick Hart. Mr. Hart won third place in the initial design competition, and his sculpture was formally unveiled in 1984. 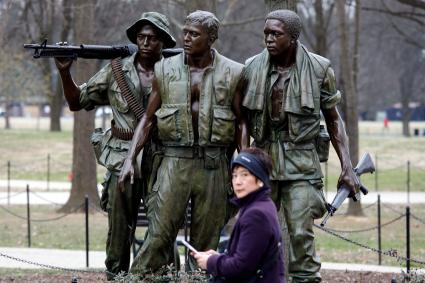 The VVMF broke ground for the wall on March 26, 1982, and the building company completed construction of the Wall in October the same year. The memorial was formally dedicated on November 13, 1982, Veteran's Day. The wall and the walkway in front of it are built from black granite that was imported from Bangalore, India. A total of 140 concrete pilings sunk 35 underground support the seventeen panels of the Wall, which are 246 feet and eight inches long. The panels were cut and finished in Barre, Vermont, and still bear evidence of the techniques used, including flame treating and polishing.

The Names on the Vietnam Memorial

More than 58,000 names are inscribed on the wall. The names are not arranged in alphabetical order, but in chronological order from the place where the walls meet. The names proceed from left to right on the right-hand panel, and continue on the far left side of the left panel, ending in the middle with the year 1975. The VVMF publishes a directory of the names inscribed on the Wall called The Vietnam Veterans Memorial Directory of Names, and also maintains a searchable online database of the names. 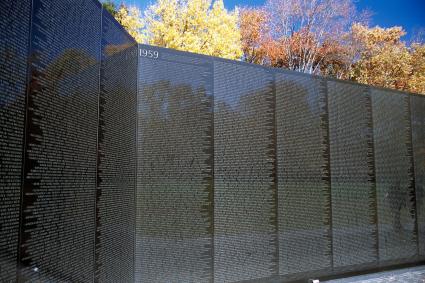 The directory lists the location of names by panel number, East (right) or West (left) wall, and line number. The panels at the Memorial are numbered, and a dot is located next to every tenth line to assist visitors in name location.

Each name has a symbol that indicates the service person's status. A diamond symbol indicated a confirmed death in combat; service members that were missing at the end of the war have a cross symbol next to their names. If a missing soldier returned home alive, a circle would be added around the cross symbol, and the diamond symbol is added over the cross if the soldier's remains are returned to the U.S.

One of the most interesting Vietnam Memorial facts is that only eight women's names are inscribed on the wall, and all are nurses. To honor the women who served in Vietnam, the Vietnam Women's Memorial Foundation commissioned sculptor Glenna Goodacre to design a sculpture that was added to the Memorial in 1993.

The Vietnam Veteran's Memorial has continued to evolve over the years, and a plaque was added in 2000 to honor service members who died after the war was over, including those who died from PTSD-induced suicide. Though an educational center was planned for construction at the memorial, the project's committee has shifted the focus to providing online resources. The online "Wall of Faces" includes pictures of all the service members whose names are inscribed on the wall. The continuing evolution of the Vietnam Veteran's Memorial ensures the sacrifices of the men and women who struggled and died serving their country in the Vietnam War will not be forgotten.