When it comes to writing a loved one's obituary, many newspapers have standard formats, but others allow the writer to take creative liberties. If you are struggling with what to say or where to put it in your obituary, sample obituaries can help make this task easier.

Basic obituaries include a standard set of information in a particular order. This is an example of a typical format.

Jeff Alexander Watson, age 90, died in his home in Bearstown on April 13, 2016. He was a 1944 graduate of Bearstown Central School. He went on to earn a Bachelor of Science in Wildlife Management. Mr. Watson moved to Dallas at the age of 22 where he met and married Georgia Ann Bowen. He worked for 40 years with the National Park Service before retiring.
Mr. Watson was an avid bowler and volunteered with the Boy Scouts of America. He is survived by his wife, Georgia, their daughter, Ann Smith of Dallas, their son, Jeff Jr. of Buffalo, NY, and four grandchildren. He is also survived by several siblings, nieces, nephews, cousins and many friends. He was preceded in death by his parents and sister, Jean.
Funeral services will take place at King Church in Dallas on Wednesday, April 16 at 3 p.m. Burial services will be private for immediate family, but a potluck dinner will be served for all in the church basement at 5 p.m. Flowers can be sent to In Living Memory Funeral Home, 4 First Street, Dallas, TX.

If the deceased had no family, or cost and a constraint on word count is a problem, a simple format is most appropriate.

Mary Lewis passed away in Caring Nursing Home on May 8, 2017, at the age of 67. She will be greatly missed for her sense of humor and concern for others. Respects can be paid during her funeral at Forest Lawn Cemetery on East Maple Drive in Bethesda, MD on Saturday, May 10 at 11 a.m.

Example of an Obituary for a Private Person

This brief obituary format is perfect for people who chose to keep their lives or deaths private.

Alana Mary Grant, December 13, 1967 - August 12, 2017, Erie, PA
Alana lived a fulfilling life as a mother, sister, wife and friend. She loved knitting, reading, and Sunday family dinners. In keeping with her nature, funeral services are private and for immediate family only. Those wishing to honor her life can make a donation in her name to Blankets for Babies.

Obit Sample for Someone Prominent in the Community

When a beloved community member or respected leader dies, the obituary should include more of their accomplishments.

Our community sadly lost a pillar on Friday, January 6, 2014, when Mrs. Betsy Linda Johnson, favorably known as Miss B, passed away from natural causes. Her contributions to the lives of many include the creation of Christmas for Kids charity organization, a 20-year stint as President of the Neighborhood Watch Program, development of the abandoned Farm Street factory into the Maryville Soup Kitchen, and thousands of quilted blankets made and given to homeless veterans in our area.
Betsy is survived by the loving community of Maryville and her husband of 54 years, Mr. Gerald Johnson, their three sons; Bert Johnson, Stephen Johnson, and David Johnson, along with their wives and children. Mrs. Johnson is also survived by one sister, Ella Mae Swanson and several cousins. She was preceded in death by her parents, Mr. and Mrs. Clarence Mayer, two sisters, Millie Mayer and Gertrude Smith, and one brother, Robert Johnson.
Her legacy will live on in the hearts and minds of everyone she interacted with as well as those she reached but never met. Share your stories of remembrance on Sunday, January 8, 2017, at Temple of God Church from 3 - 5 p.m. Help her kindness, loyalty and compassion continue by making a donation to, or volunteering at, one of the organizations Miss B loved.

Example of a Child's Obituary

A child's death is one of the most difficult to write about. This scenario warrants less formal language and a childlike, sentimental tone.

"So come with me, where dreams are born, and time is never planned." -Peter Pan
Our precious JJ left his parents' embrace, embarking on an epic adventure to Heaven. Jeffrey Jerod Maitland was born March 13, 2010, and passed away from a biking accident on April 4, 2016. He was an energetic boy who loved nothing more than running, jumping and play sword-fighting.
Those he'll meet in Heaven include his paternal grandparents, great-grandparents and his Uncle Henry.
He is survived in this world by his mother, father, two sisters, brother and maternal grandparents.
At this time, the family is asking for privacy as they grieve and heal together. Donations in JJ's memory can be made to Children's Hospital of New York. 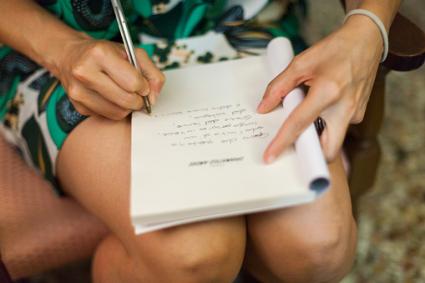 Customize any standard obituary format with the addition of personal notes such as:

Tips for How to Write an Obituary

Obituary writing is not a skill you learn in school. Personalize a free obituary template or follow these simple steps to create an obituary worthy of your loved one. Use your words, but include the following so others receive appropriate information:

Before you submit the final obituary, take time to proofread and get a second opinion. Check for proper spelling, capitalization and dates.

The format of an obituary determines what information people receive and makes a statement about the subject. View several samples to give you an idea of what works and what doesn't for your specific situation.