A Hawaiian funeral often follows specific island traditions and burial customs. You can discover traditional Hawaiian ways to celebrate the life of your loved one.

Many of the modern Hawaiian funerals are a hybrid of Hawaiian traditions and western funeral culture, such as a funeral held in a church or funeral home. Gravesite funerals are also practiced, as are those held in the home.

A family may choose to have the body of their loved one cremated, and the ashes placed in an urn. The urn may be kept in a special place inside the home, urn garden, or scattered at sea.

The etiquette for a Hawaiian funeral often depends on the deceased's family preferences. Common courtesy is always good etiquette. You can easily find out the type of funeral through the funeral home or family members so you aren't surprised or out of sync with the funeral attire or religious practices.

In addition to the type of funeral, consider any religious observances that the funeral service will follow. This will be your guide on how to respond and react during the funeral.

Most Hawaiian funerals are a form of celebration of the deceased's life. Stories, often funny ones about the deceased, are popular as the eulogy part of the funeral service. Attendees aren't afraid to laugh at funny stories or show their affection for the deceased's family members.

In Hawaii, it is perfectly acceptable to wear what's commonly known as Aloha attire. An Aloha funeral dress code means Aloha shirt designs and dresses. While color is often on full display, many people prefer more subdued colors for a funeral. For this type of casual funeral, formal black attire is typically considered out of place. 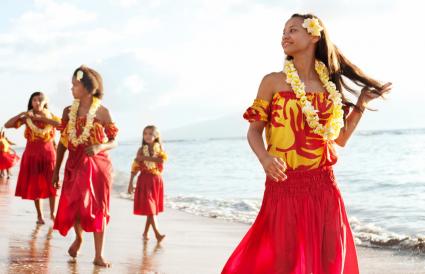 Casual Aloha Attire for a Funeral

For some families, the Aloha dress code may be extremely casual. In such instances, shorts are perfectly acceptable funeral attire as are slippahs, aka flip flops.

You'll can often find a mix of Aloha attire and formal black attire at some non-traditional funerals. Unless the family specifically requests formal attire, you are always safe in wearing Aloha attire to a funeral.

A longstanding tradition is to wear a lei to show respect for the deceased and deceased's family. The colors can range from brilliant to subdued and you can choose fragrant flowers if you desire. Another popular funeral lei choice is the maile lei. This is a lei of greenery usually made from leaves and/or vines.

When the funeral is over, you can either place the lei on the casket, toss it into the ocean, or place it in a spot or area that was special to the deceased. Another way to further honor the deceased is to unravel the lei and gently broadcast the flowers over the ocean waters.

Besides attendees wearing leis to honor the deceased, leis can also be used as part of the funeral decorations. Leis are placed on caskets, guest book stands, and draped over a framed photo of the deceased. 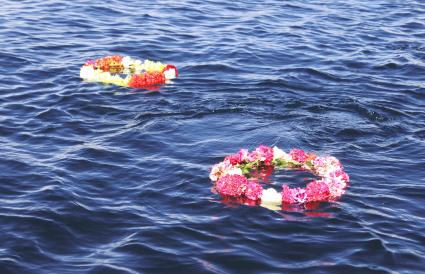 Cards and Gifts for Hawaiian Funeral

A Hawaiian tradition is to take a sympathy card, gifts, and flowers to the funeral. Most funeral cards contain money to help the family defray the cost of the funeral and are considered a highly respectful gift.

The tradition of what's known as a Paddle Out funeral ceremony seems to be a modern creation by surfers. It is an increasingly popular way to send off a loved one. Famous Hawaiian singer and performer Israel "IZ" Kamakawiwo'ole was honored with a paddle out funeral with a huge turnout.

Attendees wearing leis paddle out on surfboards and sometimes kayaks. They surround the funeral boat that carries the family of the loved one, anyone acting as an officiant, and the urn containing the deceased's ashes. The paddlers form a circle and hold hands as they float on the ocean's surface.

Variations of Paddle Out Funeral Format

Various formats can be used, with the most popular being the sharing of stories of the deceased, prayers, chants, and songs. The ashes are emptied from the urn into the ocean. The leis are often placed on a lone surfboard or tossed into the water inside the circle. These actions are followed by cheers, wishes to the deceased, and the splashing of water.

Many of the Hawaiian chants are considering healing chants. Biblical verses are often chanted at funerals as well as chants giving thanks to the spirits. Hawaiian chants are called mele and have been passed down over thousands of years. The chants document Hawaiian history with two types of meles.

Mele oli is a ritual chant that is versatile enough to be used for a funeral or a birth. It is chanted by only one person.

According to Kamehameha Schools, a rare funeral chant, mele kanikau, is no longer used. It is an extremely intimate and personal chant that is usually used only one time.

Hawaiian chant prayer giving thanks to the spirits.

The hula is an ancient form of Hawaiian worship and is considered a sacred gesture that has ancient roots in Hawaiian culture for all kinds of ceremonies, including funerals. Each dance movement has a specific meaning and may be performed only for specific ceremonies and religious services.

In 1998, the Vatican had banned the hula from being performed in funeral masses after a person complained it wasn't worshipping. After Honolulu Bishop Francis X. DiLorenzo argued that Psalm 149 condones the hula with, "Let them praise his name in the dance," the Vatican reversed its earlier ruling. In addition to funerals, the hula is allowed to be performed for weddings, first communion, and other religious services.

If you need a Hawaiian funeral poem, you can find several appropriate traditional sayings, songs and meles that are very poetic. O`ahu is a traditional mele you can use for a funeral since it is uplifting about the beauty of rainbows, birds soaring to heaven in the land of love.

An ancient Hawaiian funeral prayer (nā pule) is made to ancestors and Hawaiian gods. The family will either chant a prayer or sing to encourage the spirit to leave the body. In addition, a worship prayer along with food is given to the spirit so it will assist the family. This type of prayer is known as ka-ku-ai. Modern funeral prayers can also be specific to a particular religion.

Religious songs and chants are part of Hawaiian funeral services, as well as drum and flute accompaniment. Some songs are accompanied by a ukulele.

One of the most recognizable Hawaiian songs, "Aloha 'Oe" (Farewell to Thee)

The ancient death customs of Hawaiians allowed their deceased to decompose back into the earth. It is believed such burials imbue the earth with the deceased's spirit to empower their descendants. It is a cycle of spirit and energy returning to nurture the earth.

Ancient Hawaiian funeral traditions included various locations for burying the dead. The bones of the deceased are believed to hold on to the divine energy that keeps the spirits attached to the bones.

Many Hawaiians, including kings, were buried in caves. This practice prevented enemies from desecrating the remains. Hiding the remains was a tradition that meant bones are buried all over the islands.

Fishermen were placed in red shrouds and buried at sea. It was believed that the sharks would consume their bodies, so the fishermen's spirits would live on in the sharks to protect other village fishermen from shark attacks.

Sand dunes were another popular burial site. Many of the remains have been excavated during construction on the island. While there are legal protocols for the removal of burial sites and bones, historically, these laws were misapplied. 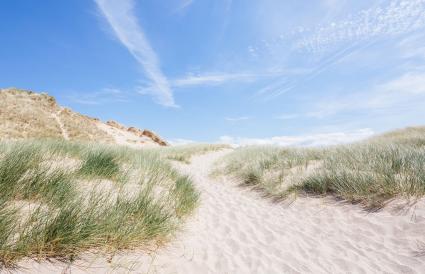 Part of the ancient Hawaiian funeral customs included what is known as a "Clean Burial." Until recently, this practice was prohibited due to health concerns.

The thousands of years' old sacred Hawaiian tradition of "Clean Burial" is a ceremony of just the person's bones being buried. The ritual allows family members to remove the deceased bones once the body has been partially cremated.

Preparation and Burial of Deceased's Bones

The bones are then prepared for burial in a Hawaiian burial cloth that is placed in a casket or other container and buried in a cemetery. This ancient practice was once outlawed, but a new law signed by the Hawaiian governor in June 2015 allows Hawaiians once more to practice their ancient burial rite.

Steeped in history that is thousands of years old, Hawaiian funerals offer many choices for authentic burial customs and traditions. You can create your own hybrid that intertwines Hawaiian customs with modern practices.