Hymns are a meaningful choice of religious music that can be played at funerals. In addition to bringing peace and comfort for the grieving, funeral hymns stir memories strong memories of faith and tradition. When choosing a funeral hymn, consider some of these most popular hymns, together with some of the personal favorites of the deceased.

Over the years, certain hymns found acceptance because they provided comfort and strength for the grieving. When selecting hymns for a funeral, check with the local clergy regarding the need to use approved hymns during the service. The following list of hymns for comfort in death contains traditionally accepted hymns that cross many denominational lines. The hymns are not listed in any particular order of popularity.

Probably the most famous of all hymns, this song of hope and redemption speak to countless Christians. While certain stanzas seem less suited for a funeral, the reputation makes it appropriate for any occasion, and the last stanza shouts hope into the hearts of mourners. Written in 1772 by English poet and clergyman John Newton, the words grew from the personal experience of one without a religious conviction, but guided through circumstances to the arms of a loving God.

As tuberculosis ravaged his body and the knowledge of his approaching death plagued his mind, 54-year-old Henry Francis Lyte used his personal time of tragedy and trial to pen one of the most beloved hymns of all time. Reflecting on personal mortality and a relationship with God, the song relates to audiences with the request for God to say near "as the darkness deepens."

Many hymns speak to the hope for the future, which is a bedrock of the Christian faith, but few will speak to the circumstance of the mourner like this hymn. Hymnwriter Francis Jane (Fanny) Crosby had a severe eye infection as a baby. A doctor placed a hot paste on her eyes. The infection cleared, but the scars on her eyes left her blind for life. She went on to pen over 400 hymns for churches.

Great Is Thy Faithfulness

A personal favorite, this hymn speaks to the never-changing goodness of the Father to his children. The hymn is written by Thomas Chisholm, who spent his childhood in a log cabin in Kentucky. Converted to Christianity at the age of 26, the editor of a local newspaper wanted to incorporate Scriptural content into his hymns to avoid overly emotional lyrics. The mourner often looks for an anchor in the tumultuous storm of grief. A foundation built in the faithfulness of God stabilizes life's difficult times.

The popular hymn written by the Reverend Augustus Toplady in 1763, the tradition says he was caught in a storm when traveling around England. Finding shelter in a gap in the gorge, he penned the title and initial lyrics as he sought shelter from the storm. The message will resonate with mourners seeking a shelter during the fierce storm of grieving the loss of a loved one.

There is a Balm in Gilead

The "balm in Gilead" reference is from the Old Testament (Jer 8:22), but the application of the concept is applied to salvation through Jesus Christ. The balm was interpreted to be a spiritual medicine to heal Israel. The ultimate healing for the condition of physical death can be found through Jesus. The words are found in a refrain of a hymn by John Newton, relying on a traditional African American spiritual.

Be Thou My Vision

The hymn reflects the words of an Irish poem, forming a Christian hymn that may date back to the fifth century. Tradition places the story behind the poem to the missionary St. Patrick. It is best known today by the hymn and prayer formed by Eleanor Hull that God would be our vision above everything else.

Anglican bishop Reginald Heber (1783-1826) is credited with penning the words to this favorite Christian hymn. It is thought to be one of the few hymns that have become widely used across denominational hymnals. The words stir a sense of awe at God's majesty and holiness.

Written in the 19th century by Annie Hawks and Robert Lowry, this favorite hymn touches upon faith, suffering, perseverance, and ultimate comfort. The hymn serves well as a prayer for God's guidance through every step of life's difficult journey, magnified by the additional weight of grief. God's presence is an encouragement for the preparation on the road to healing.

The Lord Is My Shepherd

A traditional hymn written by James Montgomery, the lyrics are based upon the popular passage of Scripture from Psalm 23. The words are some of the most well-known in the Bible and will bring comfort and strength to most believers. The music is moving and builds to an emphasis upon the presence and comfort of the Lord.

Additional Hymns for Comfort in Death

The Christian faith is rich with hymns about death that are appropriate for use during a memorial ceremony. The following list details ten more popular funeral hymns to provide comfort for the grieving.

The words of the Lord's Prayer are familiar even to non-believers and will provide comfort during times of loss. The prayer was put to a musical setting by Albert Hay Malotte in 1935 and has been recorder by many musicians over the years.

One of composer Franz Schubert's most popular works is the "Ave Maria." The words itself is the Latin name of the prayer Hail Mary and is familiar to both Catholics and Protestants. The piano arrangement of the piece is by Franz Liszt.

Sometimes known by its first line, "I Come to the Garden Alone," this gospel song by C. Austin Miles is popular because of its peaceful setting and the comfort of the walking and talking presence of the Lord. The song was first published in 1912 and became popular during the Billy Sunday evangelistic campaigns. The song was recorded by dozens of popular musicians in the late 1950s and 1960s.

Dear Lord and Father of Mankind

The hymn was published in 1872 by John Greenleaf Whittier. At one time, it was included in 453 different hymnals. The words provide praise for the calming presence of God during the strain and stress of life. Mourners appreciate the comfort found in God's promise to continue to bless through turmoil with a still, small voice of calm.

The hymn by Charles Wesley, leader of the Methodist movement, is one of about 6500 hymns by the English clergyman. The lyrics speak to the divine love of God found first in his Son Jesus Christ, and eventually ending with the eternal worship of the Father in heaven. The mourner finds comfort in the promises of heaven for the deceased.

What a Friend We Have in Jesus

This Christian hymn traces its roots back to a poem written by Joseph Scriven comforting his mother in Ireland while he was living in Canada. The tune was composed by Charles Crozat Converse in 1868. The mourner appreciates the comparison of Jesus to a faithful friend, standing by in the wake of trouble.

The popular hymn was written by Eleanor Farjeon in 1931 and has been published in 82 different hymnals. Ms. Farjeon was an English writer for children's materials. The song gained in popularity when it was included in an official songbook of the Salvation Army. The mourner finds peace in the breaking of morning after death's darkness.

The popularity of this hymn at funerals speaks to the reference to the death of Jesus and his eventual resurrection. The hymn written by evangelist George Bennard. The writer offers adoration for Christ and his sacrifice at Calvary. The song has been a country gospel favorite since it was included on popular singer Ernest Tubb's 1952 gospel album.

On Jordan's Stormy Banks I Stand

The long-standing image of the Jordan River being the separation point between earth and heaven is portrayed in this popular hymn. The lyrics were penned by Samuel Stennett in 1787, while the music and arrangment was composed by Matilda Durham and Rigdon McIntosh in 1835. The song has been published in 1228 different hymnals. Many of the phrases in the song find their roots in Revelation, the final book of the Bible.

There are times when the setting for the funeral is less formal, but hymns are still desired to build the proper atmosphere showing respect for the deceased and the grieving family. The following lists contain more contemporary compositions, along with those the feature the positive topics of hope and heaven.

Over years of officiating and attending funerals in hundreds of churches, several hymns seem to be particularly popular among certain denominations. The following lists may be helpful to categorize several of the more popular funeral hymns. 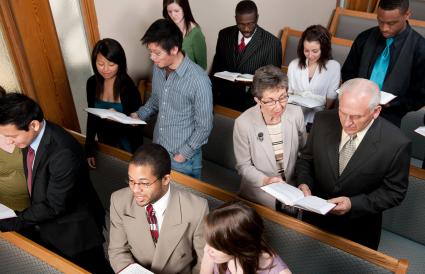 Music serves a vital function in a memorial ceremony. Lyrics and arrangements of funeral hymns help process feelings that are difficult to put into words. For people of faith, these feelings can often be expressed through well-known hymns which express devotion to God whose presence comforts his people in times of sorrow.