Throughout history you'll find numerous examples of poems about death that have become famous. These poems capture universal themes, thoughts, and feelings about death and help readers cope with grief or honor a lost loved one.

Short death poems sum up the immense feelings surrounding one's own demise or the death of a loved one. These poems are perfect for keepsake items and funeral programs because they don't take up a lot of room, but make a big impact.

The Life That I Have

The Life That I Have by Leo Marks says, "Yet death will be but a pause" as the author reflects on losing his girlfriend in a plane crash. Some people view this poem as a beautiful wedding poem, but it is also a poem about death. The author talks about how his life belongs to his love, and even in her death, he'll find peace and love in his life for her sake.

Poet Sara Teasdale uses beautiful imagery to explore what happens after you die and how love spans eternity. In Love and Death, a three-stanza poem, Teasdale says, "For still together shall we go and not/Fare forth alone to front eternity." This short poem is great for if you've lost a spouse or romantic partner.

South Korean scholar Seong Sam-mun wrote this jisei, or death poem, before his execution. In the short poem, he describes what the afterlife might look like and explores the feelings of the unknown often associated with death. The last line reads, "This night, at whose house shall I rest?"

I Know I Will Love Death

Indian spiritual leader Sri Chinmoy was known for his wise words on all topics. In his short poem, I Know I Will Love Death, he shares the belief that he will love death, "Because death too/Is God's creation." The poem is religious in nature and speaks to loving all things created by God including,"Infinity's Life immortal."

Jeanne Willis' short, inspirational poem about death features a grandfather's advice and helps you remember that those who die do not disappear from your mind and heart. In Inside Our Dreams, the narrator asks "Where do people go to when they die?" and the grandfather replies "They simply set up home inside our dreams."

Zen master Kozan Ichikyo wrote many death poems, as was customary for people of his station. In one untitled death poem, he says, "Empty-handed I entered the world/Barefoot I leave it." In the short poem, he shares the idea that birth and death are simply two parts of life and neither is a cause for much attention.

The best poems for funerals are those that beautifully capture the emotions surrounding a death. These poems become famous because they do not make death sound scary or depressing, but add beauty to the circumstance.

Do Not Stand at My Grave and Weep

Mary Frye's moving poem about finding comfort in grief even if you can't visit a grave marker. Frye explores the many ways loved ones live on in the world around you. The poem opens with, "Do not stand at my grave and weep/I am not there; I do not sleep" before launching into beautiful imagery about where you could find your loved one in your world. 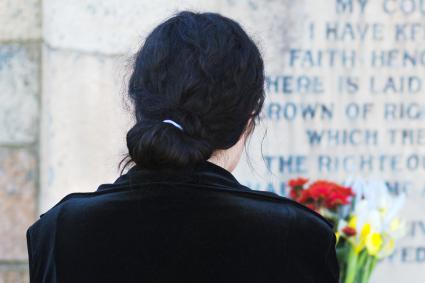 As one of the most famous writers of all time, it's no surprise William Shakespeare penned one of the most famous poems about death. In Sonnet 18 he writes, "Nor shall death brag thou wander'st in his shade." The basic sentiment of the poem is that the subject of the poem can never truly die, because he will live on forever in the words of the poem. This great memorial poem helps you see that your loved ones will live on as long as you pass on photos and memories of them.

Insightful black writer Langston Hughes shares how attempts at ending life actually made the subject of the poem feel more alive. Life is Fine talks about suicide in a poetic and inspirational way by talking about how life will have difficult moments, but that's part of being alive. In the end, the narrator shares, "And you may see me cry-/I'll be dogged, sweet baby,/If you gonna see me die."

Tis Only We Who Grieve

If you are grieving the death of a loved one, Tis Only We Who Grieve by an anonymous author is a beautiful inspiration for looking at your grief from a new perspective. The poem portrays the deceased as happy and still here, but those left behind are the ones who feel the sadness of the loss. One of the most famous lines from the poem comes near the end and says, "If only we could know the reason why they went/We'd smile and wipe away the tears that flow."

If you're hosting a celebration of life, Afterglow by Helen Lowrie Marshall is a great poem to include. This short poem relays the message that your loved one wants you to be happy remembering their life, not sad about missing them. The narrator starts by saying, "I'd like the memory of me to be a happy one."

Poems about death can be inspirational when they give you hope that grief will get easier or that the deceased is not in pain. Use these poems to help others grieve by adding them in funeral programs or sending them in cards of condolence.

Because I Could Not Stop for Death

As one of the world's most famous female writers, Emily Dickinson shares a lot about difficult emotions. In Because I Could Not Stop for Death the author takes an imaginative and whimsical approach to encountering death personified. She starts, "Because I could not stop for Death/He kindly stopped for me." The entire poem talks of death as its own journey, not a trip with a final destination. It also speaks to not fearing death, for it is it's own enjoyable experience in the afterlife.

John Donne's Sonnet X also goes by the name Death, Be Not Proud. The poem expresses the idea that death is not the master of man because man's soul lives on eternally. The last line reads, "And Death shall be no more; Death, thou shalt die." This inspirational short poem gives power to those dealing with life-threatening illnesses.

Sylvia Plath is known for writing on epic mood swings brought on by the trials of life. In Lady Lazarus, she describes her many near-death experiences, some self-inflicted. She states, "Dying/Is an art, like everything else./I do it exceptionally well." In the end, Plath equates herself to a Phoenix who continually rises out of the ashes taunting both God and Lucifer. Although the poem talks about death and cheating it, the poem also represents a rebirth that happens to those who survive near-death experiences.

A Psalm of Life

This long poem by famous author Henry Wadsworth Longfellow contradicts the idea that death is the end of life. Longfellow writes, "Let us, then, be up and doing,/With a heart for any fate." to remind people that life is meant for living, not worrying about or preparing for death.

Rabindranath Tagore's Farewell My Friends is written from the perspective of the deceased and asks friends to remember him fondly, not sadly when he's gone. The poem starts, "It was beautiful as long as it lasted/The journey of my life."

When you want a famous poem about death that truly speaks to your specific situation, look for poems about specific deaths. Topics from a death of a classmate poem to ethnic poems related to grieving are easy to find. 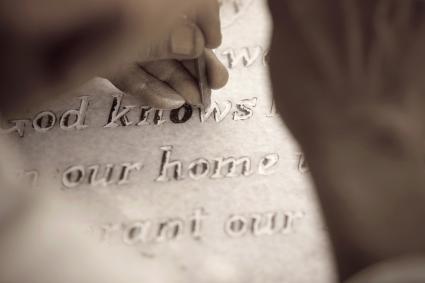 If Roses Grow in Heaven

When you need poems in memory of a mom check out If Roses Grow in Heaven by Dolores M. Garcia. This short, beautiful poem is from a child's perspective asking God to let her mother know she's thinking of her.

Do Not Go Gentle Into That Good Night

For the loss of your dad, Dylan Thomas' Do Not Go Gentle Into That Good Night is a great option. Written by the poet for the loss of his own father it reads, "And you, my father, there on the sad height,/Curse, bless, me now with your fierce tears, I pray."

One of the most difficult deaths is child loss and death of a child poems or poems for infant loss can help parents grieve. Ron Tranmer's Heaven's Rocking Chair is a comforting ode for parents to imagine angels in heaven are taking care of their baby. The poem opens with the question, "Are there rocking chairs in Heaven/where little babies go?"

Epitaph to a Dog

Pet owners looking for poems about the death of a dog appreciate Epitaph to a Dog written by George Gordon Byron. In the poem the author admonishes man for not giving dogs, man's best friends, the same funeral respects they give human friends. He ends the poem stating, "To mark a friend's remains these stones arise;/ I never knew but one - and here he lies," sharing how his dog was his one true friend.