Death and funeral rituals in Africa are deeply rooted in the cultural beliefs, traditions, and indigenous religions of the continent. They are guided by Africans' view of existence after death and the power and role of the deceased ancestor. Rituals evolved through the infusion of Christianity, Islam and modern changes, but traditional themes survive in Africa and among people of African descent in the Caribbean and the Americas.

Beliefs About Death and Dying in African Culture 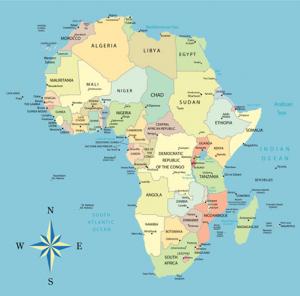 According to Macmillan Encyclopedia of Death and Dying, death rituals in Africa are to ensure that the deceased is properly put to rest so his spirit is at peace and he can take his place among the protective ancestors. Rituals are as much a celebration of the role of the dead as it is mourning his passing,

The "right" burial ensures that the ancestor doesn't remain to haunt and exert power over the living, but instead rests in peace and protects the family. This belief comes from a common African concept that life and death are on a continuum of existence, with death seen as just another state of being. In death, the whole person still exists but now inhabits the spirit world and he can be reincarnated into several people.

If the deceased is not buried "correctly," or a person lived a life of dishonor, his ghost can remain as a part of the world of the living and wander around and cause harm. In addition, witches, sorcerers and the undeserving may be denied a "proper" burial. In this way, they are denied the honor of being part of the community of ancestors, a place highly valued in African beliefs.

In the vast continent of Africa, with its many countries and indigenous religions, the diverse ethnic groups or tribes have their variations of death rituals, even within a country. However, there are some similarities in basic themes because of shared traditional beliefs about the dead and reverence for the ancestors. An outline of the South African Xhosa tribe's rituals for President Nelson Mandela's 2013 funeral illustrates some basic customs.

African death rituals begin by preparing the home soon after a person dies and receiving people who come to pay their respects to the dead. According to the Macmillan Encyclopedia of Death and Dying reference, home rituals often include:

In the period before the burial, when community mourners arrive at the home, there may be loud distinctive crying. This may be heard at a distance as described in a Zambian experience. There is also a gathering of food and other supplies, cooking, eating, and assignment of tasks to prepare for the funeral.

Removing the Body From the House for Burial

Death rituals for removing the body from the house to take to a morgue or the burial site are meant to confuse the dead so he can't find his way back home or into the house too soon. Some customs, according to Macmillan Encyclopedia of Death and Dying, include:

According to Igbo Funeral Rites Today, the Igbo tribe prefer to bury their dead as quickly as possible so they can join the ancestors. Other tribes may delay the burial until family comes from far away. Today, some people choose to store their dead in a morgue for weeks or months while they wait for family members to come, to collect donations, or plan a fancy funeral.

The day of the funeral there is usually a procession to the burial site, sometimes before sunrise, with singing and dancing. Many bury their dead on family land and the plot may be near the house but not on planting fields, believing crops won't grow, according to the Encyclopedia of African Religions. 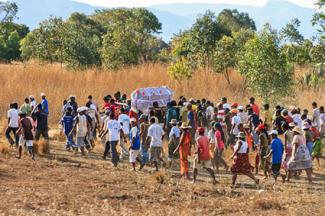 The deceased may be wrapped in his clothes for burial and covered with the skin of a slaughtered animal. In some groups, the body is wrapped in a linen shroud. Personal items are often buried with the deceased to help him on his journey. The Yoruba tribe, for example, include food, clothes, fowls or other animals, while other tribes include spears, shields, or pots and pans, so the deceased has all he needs in the afterlife.

Macmillan Encyclopedia of Death and Dying states that at the burial people request a favor for the family, a strengthening of life, and protection from trouble from the deceased. There might be a ritual killing of an ox or cow so it can accompany the deceased to the land of his ancestors ("the home bringing"), and to act as a protector for the living.

It is typical for a death in Africa to bring the family, some of whom come from a distance, and the whole community together, according to a doctoral thesis, Mourning Rituals and Practices in Contemporary South African Townships (page 24). Often, many community members attend the burial to support the family members.

In general, the immediate family remains silent during the burial rites and usually stands on one side of the gravesite, with the community on the other. Some groups ban children and unmarried people from attending the funeral.

According to the book Funerals in Africa: Explorations of Social Phenomenon, death customs in Africa do not end with the burial. After-funeral rituals and mourning customs can continue for a long time in some areas. This is especially true in sub-Saharan Africa in countries such as Kenya and Angola. These celebrations can be elaborate, lively and costly. 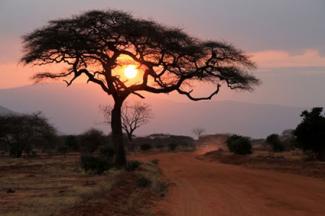 After the funeral, people go back to the family home to eat. Mourning Rituals and Practices in Contemporary South African Townships (page 26) states that people are expected to wash off the graveyard dust and may go through a ritual cleansing at the gate. Some mourners put pieces of the aloe plant in water as this is said to ward off evil. Christians may also sprinkle mourners with holy water to purify them.

Mourning rituals may continue for at least a week after the burial, notes Mourning Rituals and Practices in Contemporary South African Townships. During the formal mourning period traditional practices include:

Widows are expected to mourn for six months to a year and children who lost a parent are expected to mourn for three months. After the formal mourning, the family can stop wearing black. The family may hold a ritual or create a shrine a few days or weeks after the funeral to honor and respect their dead. At some time later, the family may hold a ceremony to commemorate the deceased becoming an ancestor.

Africans believe that anyone or anything that came in contact with the dead is unclean or polluted. According to Macmillan Encyclopedia of Death and Dying, cleansing rituals start before burial and again about seven days or more after the funeral. Ritual cleansing may include:

An animal may be sacrificed at the time of the ritual cleansing of the home and family and again about a month later to put the dead's soul at rest.

Evolution of the Rituals

African death rituals evolved when the traditional religious beliefs of Africa were challenged and modified by the spread of Islam and Christianity to the continent. Yet, up to the early 1900s in some countries, such as parts of Kenya and the Cameroons, "unimportant people" and the young were not given funeral rites, but instead, were left for the hyenas.

In some areas, only vestiges of the traditional rituals remain beneath colonial teachings, but customary belief in the meaning of death, the after-life, and the old ancestors' place of honor continue in Africa. The African slave trade brought these beliefs and customs to the new world. The enslaved were allowed to practice their death customs and evolved elements of mainly West African death rituals can be seen in the Americas and the Caribbean, with Jamaican death rituals being a good example.

According to the book, Funerals in Africa: Explorations of Social Phenomenon, changing social and political influences also lead to the increasing extravagance of death rituals now common in parts of contemporary Africa. Examples of this were already noted in the 17th to 18th centuries in areas such as the western Gold and Slave Coasts, and in Angola, Kinshasa and the Congo (Brazzaville) for the burial of "important" people.

Today, in certain regions, such as sub-Saharan Africa, death rituals can be elaborate and costly social affairs. The extravagance can be seen from pre-burial preparations and fanciful coffins, to the mourning, and commemorative events, which can last for years. This is in contrast to the more private and quieter death rituals in modern Europe and other Western countries.

Like death rituals in many other cultures, African death rituals are steeped in its traditions, cultural beliefs and religions indigenous to the continent for centuries. Though religious and modern influences bring change to traditional death customs, many of the elements of the past survive in Africa and in the death rituals of people of African descent in the new world.